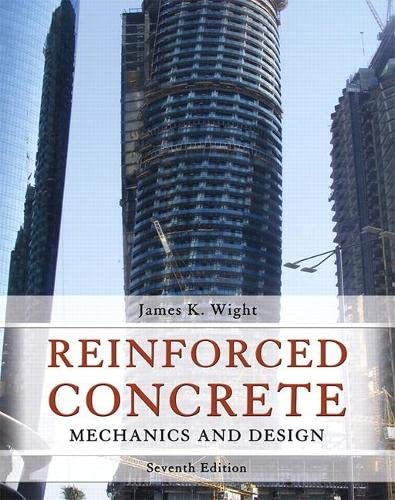 For courses in architecture and civil engineering. Reinforced Concrete: Mechanics and Design uses the theory of reinforced concrete design to teach readers the basic scientific and artistic principles of civil engineering. The text takes a topic often introduced at the advanced level and makes it accessible to all audiences by building a foundation with core engineering concepts. The Seventh Edition is up-to-date with the latest Building Code for Structural Concrete, giving readers access to accurate information that can be applied outside of the classroom. Readers are able to apply complicated engineering concepts to real world scenarios with in-text examples and practice problems in each chapter. With explanatory features throughout, the Seventh Edition makes the reinforced concrete design a theory all engineers can learn from.

James K. Wight received his B.S. and M.S. degrees in civil engineering from Michigan State University in 1969 and 1970, respectively, and his Ph.D. from the University of Illinois in 1973. He has been a professor of structural engineering in the Civil and Environmental Engineering Department at the University of Michigan since 1973. He teaches undergraduate and graduate classes on analysis and design of reinforced concrete structures. He is well known for his work in earthquake-resistant design of concrete structures and spent a one-year sabbatical leave in Japan where he was involved in the construction and simulated earthquake testing of a full-scale reinforced concrete building. Professor Wight has been an active member of the American Concrete Institute (ACI) since 1973 and was named a Fellow of the Institute in 1984. He is a Past-President of ACI and a past Chair of the ACI Building Code Committee 318. He is also past Chair of the ACI Technical Activities Committee and Committee 352 on Joints and Connections in Concrete Structures. He has received several awards from the American Concrete Institute including the Delmar Bloem Distinguished Service Award (1991), the Joe Kelly Award (1999), the Boise Award (2002), the C.P. Siess Structural Research Award (2003 and 2009), the Alfred Lindau Award (2008) the Wason Medal (2012) and the Charles S. Whitney Medal (2015). Professor Wight has received numerous awards for his teaching and service at the University of Michigan including the ASCE Student Chapter Teacher of the Year Award, the College of Engineering Distinguished Service Award, the College of Engineering Teaching Excellence Award, the Chi Epsilon-Great Lakes District Excellence in Teaching Award, and the Rackham Distinguished Graduate Mentoring Award. He has also received Distinguished Alumnus Awards from the Civil and Environmental Engineering Departments of the University of Illinois (2008) and Michigan State University (2009).

Descripción Pearson, 2015. soft cover. Condición: New. International Edition. No supplemental materials. International Editions may have a different cover or ISBN but generally have the exact same content as the US edition, just at a more affordable price. In some cases, end of chapter questions may vary slightly from the US edition. International Editions are typically printed in grayscale, and likely will not have any color throughout the book. New. Books ship from multiple locations depending on availability. All orders are shipped with tracking information. We take pride in our customer service. Please contact us if you have any questions regarding this listing. Nş de ref. del artículo: 11184