Mastering XPages: A Step-by-Step Guide to XPages Application Development and the XSP Language 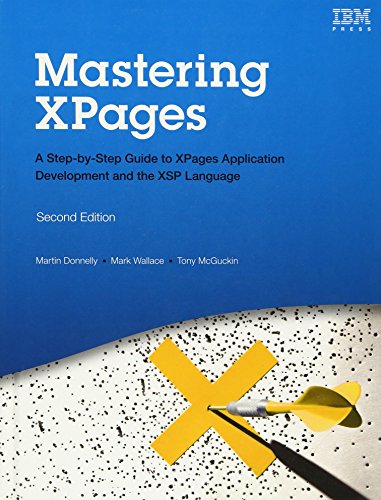 The authors of this book have a number of things in common. All three hail from Ireland, work for the IBM Ireland software lab, and have made significant contributions to the development of XPages over the past number of years. Martin Donnelly is a software architect and technical lead for the Domino Designer and XPages teams in IBM Ireland. He has worked on all XPages releases to date and also on a precursor technology known as XFaces. Martin was also a development contributor to such products as the IBM Java Visual editor and IBM Rational Application Developer. In the 1990s while living and working in Massachusetts, Martin was a lead developer on Domino Designer; this has now gone full circle as he rejoined the Domino Designer team in 2013 to head up the 9.0.1 release. Martin lives in Cork with his wife Aileen, daughters Alison, Aisling, and Maeve, and retired greyhounds Evie and Chelsea. Outside of work his main leisure time pursuits are soccer, fishing, and gardening. Mark Wallace is a software architect in the IBM Ireland software lab. In the past, he worked on the XFaces runtime, which was developed for Lotus Component Designer and subsequently evolved into the XPages runtime. He has a keen interest in programming models and improving developer productivity. Mark has worked in Lotus and IBM for more than 17 years on various products, and he is currently leading the Social Business Toolkit open source project. Mark lives in Dublin with his wife and two children and spends as much time as possible in the Ireland's sunny south east enjoying fishing and kayaking with his family. Tony McGuckin is a senior software engineer in the IBM Ireland software lab. Having studied software engineering at the University of Ulster, he began his career with IBM in 2006 and joined the XPages core runtime team shortly thereafter. When not directly contributing to the core runtime, Tony is busy with software research and development for the next generation of application development tooling, most recently focusing on mobile and responsive design. Tony also spends a lot of time directly engaging with IBM customers as an XPages consultant, where he shows his flair for UI development and his deep understanding of application performance. Tony enjoys spending time with his wife and daughter, and getting out into the great outdoors for hill walking and the occasional chance to do some hunting in the surrounding hillsides of his native County Derry.

2. Mastering XPages : A Step-By-Step Guide to XPages Application Development and the XSP Language

Descripción Pearson Education, Limited, 2014. Hardcover. Condición: Good. Shows some signs of wear, and may have some markings on the inside. Nş de ref. del artículo: 18872047-6

3. Mastering XPages: A Step-by-Step Guide to XPages Application Development and the XSP Language

Descripción IBM Pr, 2014. Paperback. Condición: Very Good. The book has been read, but is in excellent condition. Pages are intact and not marred by notes or highlighting. The spine remains undamaged. Nş de ref. del artículo: GOR010243068

4. Mastering XPages: A Step-by-Step Guide to XPages Application Development and the XSP Language

Descripción IBM Pr, 2014. Condición: Good. A+ Customer service! Satisfaction Guaranteed! Book is in Used-Good condition. Pages and cover are clean and intact. Used items may not include supplementary materials such as CDs or access codes. May show signs of minor shelf wear and contain limited notes and highlighting. Nş de ref. del artículo: 0133373371-2-4