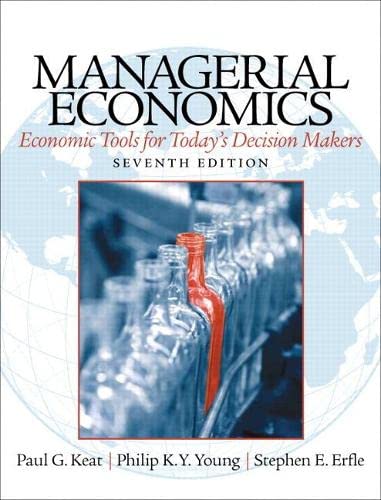 Directed primarily toward undergraduate/MBA students in Economics, this text also provides practical content to current and aspiring industry professionals. This text will excite readers by providing a more linear progression, while proving the consistency and relevance of microeconomic theory. The Seventh Edition welcomes a new co-author, Stephen Erfle of Dickinson College, who has contributed many revisions and improvements to the quantitative sections of the text, as well as provided a major addition: the use of Excel in the presentation of many of the numerical and graphical illustrations presented throughout the text. To strengthen readers' ability to use Excel-a critical skill in today's job market-new Excel Applications (Excel Apps) allow readers to turn the static figures and tables in the text into dynamic illustrations.

Paul G. Keat has been a member of the Global Business Faculty at Thunderbird School of Global Management for the past twenty-five years. At present he is an Associate Professor Emeritus. Prior to his coming to Thunderbird, he was associated for many years with the International Business Machines Corporation in professional and managerial capacities. His education includes a B.B.A. in accounting from the Baruch School of the City University of New York, an M.A. from Washington University, and an M.A. and Ph.D. in economics from the University of Chicago. Dr. Keat began his IBM career in the department of economic research and then moved into the long-range planning area. Later, as a member of the finance function, he spent several years at IBM's European headquarters in Paris, as manager in the financial planning area and then as the financial manager for the company's European software business. After his return to the United States, Dr. Keat served as manager in the pricing area of one of the company's manufacturing groups. Before leaving IBM in 1987, he was associated with the company's International Finance, Planning and Administration School (IFPA), where he taught managerial economics, lectured on finance in a number of company-related courses, and managed academic courses. He also taught at IBM's IFPA School at La Hulpe, Belgium. Dr. Keat has taught at several U.S. universities, including Washington University, the City University of New York (CUNY), and Iona College. He was an adjunct professor of finance at the Lubin Graduate School of Business at Pace University, and he also taught in Pace University's Executive MBA program. Philip K. Y. Young (www.philipkyoung.com) is the founder and president of Nth Degree Systems, Inc., a consulting firm that provides customized education and training programs to major corporations around the world. He recently co-founded Learning Burst Academy (www.learningbursts.com), a company that produces courses in business education in an innovative, digital format. He is also a member of the global faculty network of Duke Corporate Education. He has thirty years of teaching experience as a professor of economics in MBA programs and over twenty-five years of experience developing and teaching customized education and training programs. Most of Dr. Young's teaching career was spent in the Lubin School of Business at Pace University in New York, followed by several years as clinical professor of management at Thunderbird School of Global Management. His list of clients includes a number of multinational corporations in industries such as information technology, telecommunications, fast-moving packaged consumer goods, consulting services, advertising and public relations, pharmaceuticals, semiconductor manufacturing and design, diversified manufacturing, and financial services. He teaches for these companies in the United States, Latin America, western and central Europe, Asia, and the Middle East. Dr. Young received a B.A. from the University of Hawaii, a master's degree in international relations from Columbia University, and a Ph.D. in economics from New York University. Stephen E. Erfle began his career as a managerial economist during a 1994-1995 sabbatical at Seagram Classics Wine Company (SCWC). During those fourteen months, he maintained offices at Sterling Vineyards and at Mumm Cuvee Napa, where, respectively, the finance and marketing departments of SCWC resided. Trained as a microeconomic theorist, he began to use his economist's toolkit to analyze concrete business questions, such as, Should Mumm raise the price of Brut Prestige a dollar a bottle? When does it make sense to have another tasting room associate on the floor in Sterling's tasting room? On returning to Dickinson College, Dr. Erfle decided to refocus his teaching in a more applied direction. He helped found the International Business and Management department and major during the late 1990s. One of the core courses in that major is his course, Managerial Economics, which uses Excel as a teaching platform. This course is modeled after what he did during his SCWC sabbatical. In the past fifteen years, he has taught more than a thousand undergraduates how to build economic models in order to do comparative statics analysis and how to do regression modeling in Excel. Dr. Erfle received a B.S. in mathematics and B.A. in economics from the University of California, Davis, and a master's and Ph.D. in economics from Harvard University. He has also taught in the Economics Department at Dickinson College and in the School of Social Sciences at the University of California, Irvine. He is also involved in wine education; he has taught wine-tasting classes and conducted wine tastings since his graduate school days as the resident economics and wine tutor for Harvard's Leverett House.

Descripción Soft cover. Condición: New. Brand New, International/Global Edition, NOT LOOSE LEAF VERSION,NO SOLUTION MANUAL, NO CD, NO ACCESS CARD, Soft Cover/ Paper Back written in English, Different ISBN and Cover Image from US Edition; Sometimes, the title is different from US Edition, and the exercises and homework problem are in different orders or maybe completely different than the US edition, Please email us for confirmation. Some books may show some word such as Not for Sale or Restricted in US on the cover page. However, it is absolutely legal to use in USA, the book will be sent from IL. book. Nş de ref. del artículo: 10142

Descripción Prentice Hall, 2013. Softcover. Condición: New. ***International Edition***Soft cover/Paperback*** Textbook printed in English. ***Brand New***. Most international edition has different ISBN and Cover design. Some book may show sales disclaimer such as "Not for Sale or Restricted in US" on the cover page but it is absolutely legal to use. All textbook arrives within 5-7business days. Please provides valid phone number with your order for easy delivery. Nş de ref. del artículo: 9780133020267