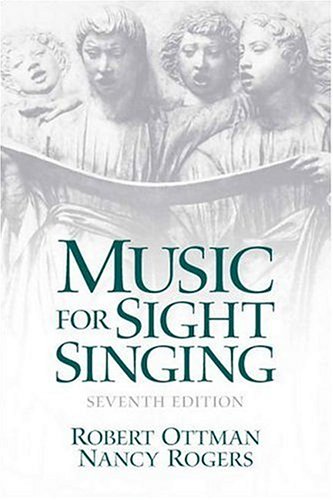 For courses in Music Theory (a two-year sequence including sight singing and ear training) as well as separate Sight Singing courses. Using an abundance of meticulously organized melodies drawn from the literature of composed music and a wide range of the world's folk music, Ottman provides the most engaging and comprehensive Sight Singing text on the market. Over fifty years ago, Robert W. Ottman set out to write a book that draws examples from the literature as opposed to being composed by the author. He proposed that students should work with "real" music as they study musical forms. The result was Music for Sight Singing. Not only is real music more enjoyable and interesting to sing than dry examples, but genuine repertoire naturally introduces a host of important musical considerations beyond pitch and rhythm (including dynamics, accents, articulations, slurs, repeat signs, and tempo markings). Several generations of teachers have also agreed that Ottman's ability to order his examples from the simple to the complex is another key to the book's long term success.

Robert W. Ottman, deceased, an internationally renowned music theorist, was an important contributor to Music Theory education. He wrote eight textbooks and co-authored four others, all which are used to educate English-speaking students worldwide. Dr. Ottman also was a professor and chair of the Music Theory Department at the University of North Texas and a conductor of the Madrigal Singers. He earned both his BA and MM from Eastman School of Music, University of Rochester, NY, and his Ph.D. from what is now the University of North Texas in 1956. He was honored with the University of North Texas President's Citation for outstanding service to the university in April 2004. Nancy Rogers is an Assistant Professor of Music Theory at Florida State University and the current Secretary of the Society for Music Theory; she is also a Faculty Reader and Consultant for the Advanced Placement Test in Music Theory. She received her Ph.D. from the Eastman School of Music, where she won both school-wide and university-wide teaching awards. Dr. Rogers' primary research interest is music cognition and its pedagogical implications, and she has presented papers at national, international, and regional conferences. Her recent publications may be found inMusic Theory Online, theJournal of Music Theory Pedagogy, andIndiana Theory Review.