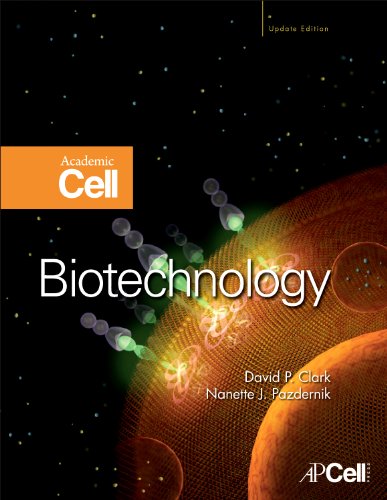 Now available with the most current and relevant journal articles from Cell Press, Biotechnology Academic Cell Update Edition approaches modern biotechnology from a molecular basis, which grew out of the increasing biochemical understanding of physiology. Using straightforward, less-technical jargon, Clark and Pazdernik manage to introduce each chapter with a basic concept that ultimately evolves into a more specific detailed principle. This up-to-date text covers a wide realm of topics, including the forensics used in crime scene investigations, the burgeoning field of nanobiotechnology, bioethics and other cutting edge topics in today’s world of biotechnology.

David P. Clark did his graduate work on bacterial antibiotic resistance to earn his Ph.D. from Bristol University, in the West of England. During this time, he visited the British Government's biological warfare facility at Porton Down and was privileged to walk inside the (disused) Black Death fermenter. He later crossed the Atlantic to work as a postdoctoral researcher at Yale University and then the University of Illinois. David Clark recently retired from teaching Molecular Biology and Bacterial Physiology at Southern Illinois University which he joined in 1981. His research into the Regulation of Alcohol Fermentation in E. coli was funded by the U.S. Department of Energy, from 1982 till 2007. From 1984-1991 he was also involved in a project to use genetically altered bacteria to remove contaminating sulfur from coal, jointly funded by the US Department of Energy and the Illinois Coal Development Board. In 1991 he received a Royal Society Guest Research Fellowship to work at Sheffield University, England while on sabbatical leave. He has supervised 11 master’s and 7 PhD students and published approximately 70 articles in scientific journals. He has written or co-authored several textbooks, starting with Molecular Biology Made Simple and Fun (with Lonnie Russell; (Cache River Press, First edition, 1997) which is now in its fourth edition. Other books are Molecular Biology and Biotechnology (both published by Elsevier) He recently wrote a popular science book, Germs, Genes, & Civilization: How Epidemics Shaped Who We Are Today (2010, Financial Times Press/Pearson). David is unmarried, but his life is supervised by two cats, Little George and Mr Ralph.