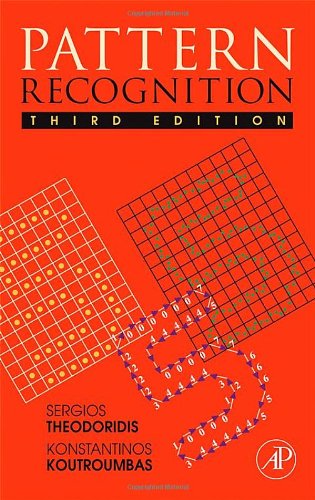 "The book is written in a very readable, no-nonsense style. I found that there was just the right amount of text to describe a concept, without extraneous verbiage. The same is true for the mathematics, enough for description, not too much to overwhelm."
Larry O'Gorman, IAPR Newsletter, April 2006

Pattern recognition is a fast growing area with applications in a widely diverse number of fields such as communications engineering, bioinformatics, data mining, content-based database retrieval, to name but a few. This new edition addresses and keeps pace with the most recent advancements in these and related areas. This new edition: a) covers Data Mining, which was not treated in the previous edition, and is integrated with existing material in the book, b) includes new results on Learning Theory and Support Vector Machines, that are at the forefront of today's research, with a lot of interest both in academia and in applications-oriented communities, c) for the first time treats audio along with image applications since in today's world the most advanced applications are treated in a unified way and d) the subject of classifier combinations is treated, since this is a hot topic currently of interest in the pattern recognition community.

* The latest results on support vector machines including v-SVM's and their geometric interpretation
* Classifier combinations including the Boosting approach
* State-of-the-art material for clustering algorithms tailored for large data sets and/or high dimensional data, as required by applications such as web-mining and bioinformatics
* Coverage of diverse applications such as image analysis, optical character recognition, channel equalization, speech recognition and audio classification