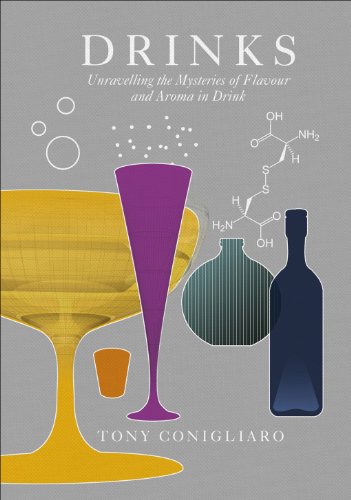 Cocktails are back in a big way - but no more '2 for 1' Tequila Sunrises. Today's cocktails are a sensory experience, concocted by experts on taste and aroma - and none is more expert than Tony Conigliaro, expert alchemist and award-winning barman.

Drinks is a stunning contemporary cocktail guide, which nods to the history of the cocktail and updates 50 classic cocktail recipes in astonishing and original ways. Tony's spins on the classics include Vintage Manhattan (using aged bourbon), new classics of his own invention (the Twinkle, now on cocktail menus the world over), drinks based on their perfume (Lipstick Rose, inspired by perfumer Ralf Schwieger's creation for Frederic Malle), fruit-based culinary creations (Sweet Grilled Lemon Margarita and Nettle Gimlet) and groundbreaking savoury drinks (White Truffle Martini).

Beautifully photographed with easy recipes and fascinating descriptions of their inspiration and creation, and with a guide to the equipment you will need to make your own libations at home, Drinks will revolutionise the art of the cocktail.

Tony Conigliaro has worked with many of the world's top chefs, restaurateurs and food writers, including Heston Blumenthal and Harold McGee. He won the award for International Bartender of the Year 2009, as well as the Observer Food Monthly award for Bar of the Year in both 2010 and 2011 (for 69 Colebrooke Row and Zetter Townhouse, respectively). Tony takes the principles of molecular gastronomy and merges them with 200 years' worth of bartending tradition, often blurring the distinction between food and drink. His drinks conjure a full sensual experience that encompasses taste, sight, smell, texture and even sound.

Descripciůn Hardcover. Condiciůn: Good. Minor shelf wear Good condition is defined as: a copy that has been read but remains in clean condition. All of the pages are intact and the cover is intact and the spine may show signs of wear. The book may have minor markings which are not specifically mentioned. Most items will be dispatched the same or the next working day. Nļ de ref. del artŪculo: wbb0018015722