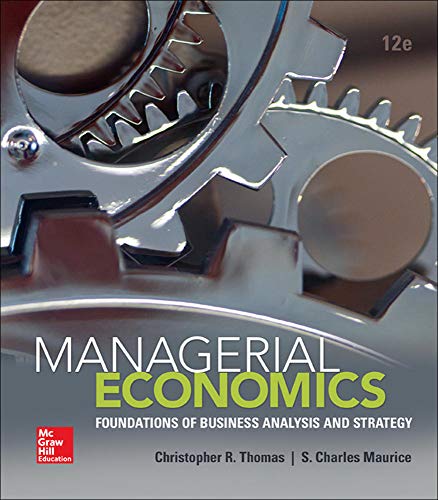 The goal of Thomas and Maurice's Managerial Economics is to teach students the economic way of thinking about business decision and strategy. This edition continues to develop critical thinking skills and provides students with a logical way of analysing both the routine decisions of managing the daily operations of a business as well as the longer-run strategic plans that seek to manipulate the actions and reactions of rival firms.

Managerial Economics is a self-contained textbook that requires no previous training in economics. While maintaining a rigorous style, this book is designed to be one of the most accessible books in managerial economics from which to teach and learn because of its clarity of presentation and strong end of chapter problems. Rather than parading students quickly through every interesting or new topic in microeconomics and industrial organization, this 12th edition instead carefully develops and applies the most useful concepts for business decision making and strategic planning.

Currently associate professor of economics at University of South Florida. He worked for two years as an energy economist at Oak Ridge National Laboratory before joining the faculty at USF in 1982. He now teaches managerial economics at the undergraduate level and in two executive training programs, a traditional Executive MBA program and an Executive MBA program for physicians that draws doctors nationwide. Professor Thomas has published numerous articles on government regulation of industry and antitrust issues in Quarterly Journal of Economics, Journal of Law and Economics, Southern Economic Journal, Journal of Economics and Business, Quarterly Review of Economics and Business, and Journal of Economic Education. He serves as a policy associate at the Center for Economic Policy Analysis at University of South Florida. Professor Thomas lives with his wife and daughter in Tampa, Florida, where he enjoys playing tennis.

Professor Emeritus of Economics at Texas A&M University. He spent 30 years in the Department of Economics at Texas A&M, where he served as Department Head from 1977 through 1981, and held the Rex B. Grey University Professorship of Free Enterprise from 1981 through 1985. Professor Maurice published numerous articles on microeconomic theory in the top economic journals. He co-wrote two scholarly books on natural resource depletion: The Doomsday Myth and The Economics of Mineral Extraction. He also wrote with Charles Ferguson, and later Owen Phillips, the widely used intermediate level microeconomics textbook Economic Analysis, which was published from 1971 to 1996. Professor Maurice retired to Gainesville, Florida, where he lived until his death in the Spring of 1999.

Descripción Softcover. Condición: New. ***International Edition***Soft cover/Paperback*** Textbook printed in English. ***Brand New***. Most international edition has different ISBN and Cover design. Some book may show sales disclaimer such as "Not for Sale or Restricted in US" on the cover page but it is absolutely legal to use. All textbook arrives within 5-7business days. Please provides valid phone number with your order for easy delivery. Nş de ref. del artículo: d9780078021909

Descripción soft cover. Condición: New. International Edition. No supplemental materials. International Editions may have a different cover or ISBN but generally have the exact same content as the US edition, just at a more affordable price. In some cases, end of chapter questions may vary slightly from the US edition. International Editions are typically printed in grayscale, and likely will not have any color throughout the book. New. Books ship from multiple locations depending on availability. All orders are shipped with tracking information. We take pride in our customer service. Please contact us if you have any questions regarding this listing. Nş de ref. del artículo: 9876