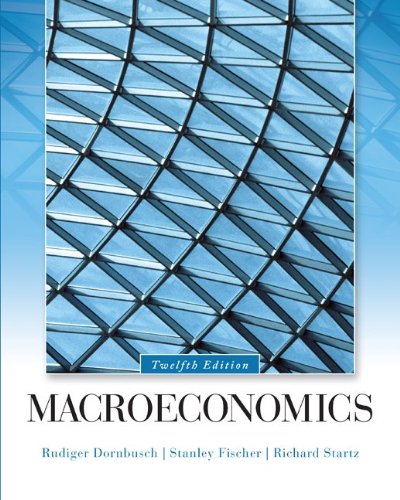 Dornbusch, Fischer, and Startz has been a long-standing, leading intermediate macroeconomic theory text since its introduction in 1978. This revision retains most of the text's traditional features, including a middle-of-the-road approach and very current research, while updating and simplifying the exposition. A balanced approach explains both the potential and limitations of economic policy. Macroeconomics employs a model-based approach to macroeconomic analysis and demonstrates how various models are connected with the goal of giving students the capacity to analyze current economic issues in the context of an economic frame of reference. The only pre-requisite continues to be principles of economics.

RUDI DORNBUSCH (19422002) was Ford Professor of Economics and International Management at MIT. He did his undergraduate work in Switzerland and held a PhD from the University of Chicago. He taught at Chicago, at Rochester, and from 1975 to 2002 at MIT. His research was primarily in international economics, with a major macroeconomic component. His special research interests included the behavior of exchange rates, high inflation and hyperinflation, and the problems and opportunities that high capital mobility pose for developing economies. He lectured extensively in Europe and in Latin America, where he took an active interest in problems of stabilization policy, and held visiting appointments in Brazil and Argentina. His writing includes Open Economy Macroeconomics and, with Stanley Fischer and Richard Schmalensee, Economics.

Descripción soft cover. Condición: New. International Edition. No supplemental materials. International Editions may have a different cover or ISBN but generally have the exact same content as the US edition, just at a more affordable price. In some cases, end of chapter questions may vary slightly from the US edition. International Editions are typically printed in grayscale, and likely will not have any color throughout the book. New. Books ship from multiple locations depending on availability. All orders are shipped with tracking information. We take pride in our customer service. Please contact us if you have any questions regarding this listing. Nş de ref. del artículo: 9875