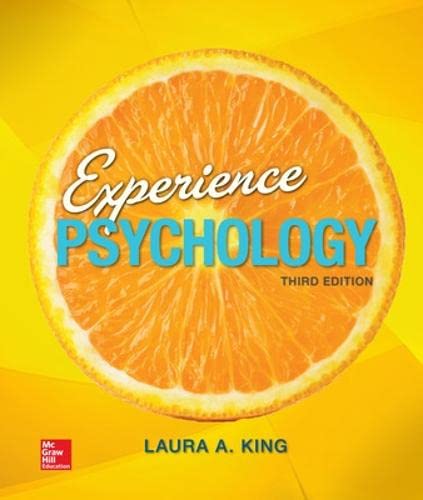 Some students take psychology...others experience it!

Informed by student data, Experience Psychology helps students understand and appreciate psychology as an integrated whole. The personalized, adaptive learning program, thought-provoking examples, and interactive assessments help students see psychology in the world around them and experience it in everyday life.

Laura King did her undergraduate work at Kenyon College, where, an English major, she declared a second major, in psychology, during the second semester of her junior year. She completed her A.B. in English with high honors and distinction and in psychology with distinction in 1986. Laura then did graduate work at Michigan State University and the University of California, Davis, receiving her Ph.D. in personality psychology in 1991.Laura began her career at Southern Methodist University in Dallas, moving to the University of Missouri, Columbia, in 2001, where she is now a professor. In addition to seminars in the development of character, social psychology, and personality psychology, she has taught undergraduate lecture courses in introductory psychology, introduction to personality psychology, and social psychology. At SMU, she received six different teaching awards, including the M award for sustained excellence in 1999. At the University of Missouri, she received the Chancellors Award for Outstanding Research and Creative Activity in 2004.Her research, which has been funded by the National Institutes for Mental Health, has focused on a variety of topics relevant to the question of what it is that makes for a good life. She has studied goals, life stories, happiness, well-being, and meaning in life. In general, her work reflects an enduring interest in studying what is good and healthy in people. In 2001, her research accomplishments were recognized by a Templeton Prize in positive psychology. Lauras research (often in collaboration with undergraduate and graduate students) has been published in the Journal of Personality and Social Psychology, Personality and Social Psychology Bulletin, Cognition and Emotion, the Journal of Personality, and other publications . A new paper on the place of regrets in maturity is forthcoming in the American Psychologist.Currently editor-in-chief of the Journal of Research in Personality, Laura has also served as associate editor of Personality and Social Psychology Bulletin and the Journal of Personality and Social Psychology, as well as on numerous grant panels. She has edited or co-edited special sections of the Journal of Personality and the American Psychologist. In real life, Laura is an accomplished cook and enjoys listening to music (mostly jazz vocalists and singer-songwriters), gardening, and chasing Sam, her 3-year-old son.

Descripción McGraw-Hill Education, 2015. Softcover. Condición: New. NOT LOOSE LEAF. REGULAR TEXTBOOK***International Edition***Soft cover/Paperback*** Textbook printed in English. ***Brand New***. Most international edition has different ISBN and Cover design. Some book may show sales disclaimer such as "Not for Sale or Restricted in US" on the cover page but it is absolutely legal to use. All textbook arrives within 5-7business days. Please provides valid phone number with your order for easy delivery. Nş de ref. del artículo: 0077861965