ArtÚculos relacionados a Electricity And Magnetism 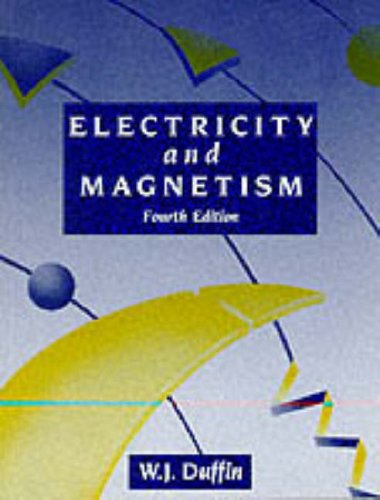 This new edition of Electricity and Magnetism retains all the features that have made it so attractive to students and lecturers over the years. The aim remains the same: to lead the student who has only a sketchy knowledge of the subject relatively slowly through the earlier stages, with a careful development of new concepts as they appear, and to provide a treatment that does not depend on great sophistication in the handling of mathematics. The pace then quickens in line with the student's increasing mastery of the subject, and the overall text achieves a standard appropriate for the first two years of an honours degree in physics, and for the final year of combined honours degree and for those majoring in physics. It is also suitable for the early stages of electrical and electronic engineering courses.
The innovative features of earlier editions have been retained. These include the emphasis on the experimental bases, the careful formulation of general laws with discussion of their limitations, the end of chapter commentaries dealing with tricky points and recent developments, and the revision summaries for those facing tests and examinations.
By providing continual guidance through what is traditionally a difficult subject, by constantly stimulating interest, and by encouraging further study and reading with up-to-date references, the author has maintained the student-oriented approach of previous editions and has reinforces it here with many new features.

A text in electricity and magnetism designed for undergraduates in their first and second year in physics and for the early stages of an electronic engineering course. It emphasizes the experimental basics, the development of concept and the formulation of laws applied to specific problems.

Comprar usado
Condiciµn: Bien
The book has been read, but is... Ver este artÚculo

Descripciµn Paperback. Condiciµn: Very Good. The book has been read, but is in excellent condition. Pages are intact and not marred by notes or highlighting. The spine remains undamaged. N¤ de ref. del artÚculo: GOR001710024

Descripciµn Paperback. Condiciµn: Good. The book has been read but remains in clean condition. All pages are intact and the cover is intact. Some minor wear to the spine. N¤ de ref. del artÚculo: GOR002359375

Descripciµn Paperback. Condiciµn: Fair. A readable copy of the book which may include some defects such as highlighting and notes. Cover and pages may be creased and show discolouration. N¤ de ref. del artÚculo: GOR002244933

Descripciµn McGraw-Hill Publishing Co., 1990. Paperback. Condiciµn: Good. Minor shelf wear Good condition is defined as: a copy that has been read but remains in clean condition. All of the pages are intact and the cover is intact and the spine may show signs of wear. The book may have minor markings which are not specifically mentioned. Most items will be dispatched the same or the next working day. N¤ de ref. del artÚculo: wbb0013888375

Descripciµn McGraw-Hill, 1990. Condiciµn: Good. This is an ex-library book and may have the usual library/used-book markings inside.This book has soft covers. In good all round condition. Please note the Image in this listing is a stock photo and may not match the covers of the actual item,1000grams, ISBN:9780077072094. N¤ de ref. del artÚculo: 8381361

Descripciµn McGraw-Hill College, 1990. Condiciµn: Good. Subsequent. Ships from the UK. Shows some signs of wear, and may have some markings on the inside. N¤ de ref. del artÚculo: GRP9596732

Descripciµn McGraw-Hill College, 1990. Condiciµn: Good. Subsequent. Ships from the UK. Former Library book. Shows some signs of wear, and may have some markings on the inside. N¤ de ref. del artÚculo: GRP25783853