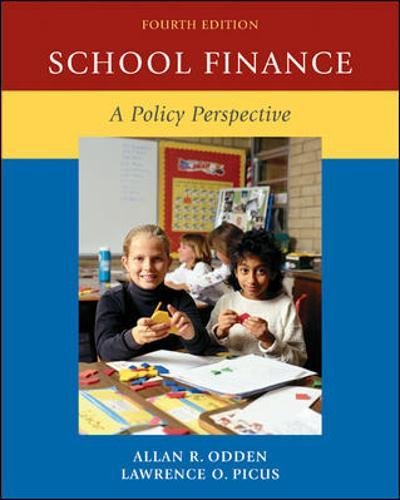 School Finance is a core text for all masters and doctoral level students of educational administration that - in addition to a clear and concise presentation of the subject - offers unique computer simulations in which students can apply school finance formulas to better understand the real-world consequences of decisions and allocations.

Allan R. Odden is a Professor of Educational Administration at the University of Wisconsin―Madison. He is also Co-Director of the Consortium for Policy Research in Education (CPRE), which is funded by the U.S. Department of Education, the director of the CPRE Education Finance Research Program, and principal investigator for the CPRE Teacher Compensation project, funded by the Pew Charitable Trusts and the Carnegie Corporation. CPRE is a consortium of the University of Wisconsin―Madison, Pennsylvania, Harvard, Michigan, and Stanford Universities. He formerly was professor of Education Policy and Administration at the University of Southern California and Director of Policy Analysis for California Education (PACE), an educational policy studies consortium of USC, Stanford University, and the University of California, Berkeley. Odden is an international expert on education finance, school-based financing, resource allocation and use, educational policy, school-based management, teacher compensation, district and school decentralization, education incentives, and educational policy implementation. He worked with the Education Commission of the States for a decade, serving as assistant executive director, director of policy analysis and research, and director of its educational finance center. He was president of the American Educational Finance Association in 1979-80, and served as research director for special state educational finance projects in Connecticut (1974-75), Missouri (1975-77), South Dakota (1975-77), New York (1979-81), Texas (1988), New Jersey (1991), and Missouri (1992-93). In 1999, he directed research projects on school finance redesign, resource reallocation, and teacher compensation. He was appointed Special Court Master to the Remand Judge in the New Jersey Abbot v. Burke school financial court case for 1997 and 1998. Odden has written widely, publishing over 170 journal articles, book chapters, and research reports, and 20 books and monographs. He has consulted for governors, state legislators, chief state school officers, national and local unions, The National Alliance for Business, the Business Roundtable, New American Schools, the U.S. Congress, the U.S. Secretary of Education, many local school districts, the state departments of education in Victoria and Queensland, Australia, and the Department for Education and Employment in England. His books include Financing Schools for High Performance: Strategies for Improving the Use of Educational Resources (Jossey-Bass, 1998) with Carolyn Busch; Paying Teachers for What They Know and Do: New and Smarter Compensation Strategies to Improve Schools (Corwin Press, 1997) with Carolyn Kelley; Educational Leadership for America’s Schools (McGraw-Hill, 1995); Rethinking School Finance: An Agenda for the 1990s (Jossey-Bass, 1992); School Finance: A Policy Perspective (McGraw-Hill, 1992) co-authored with Lawrence Picus; Education Policy Implementation (State University of New York Press, 1991); and School Finance and School Improvement: Linkages for the 1980s (Ballinger, 1983). Odden was a mathematics teacher and curriculum developer in New York City’s East Harlem for five years. He received his Ph.D. and M.A. degrees from Columbia University, a Masters of Divinity from the Union Theological Seminary, and his B.S. from Brown University.