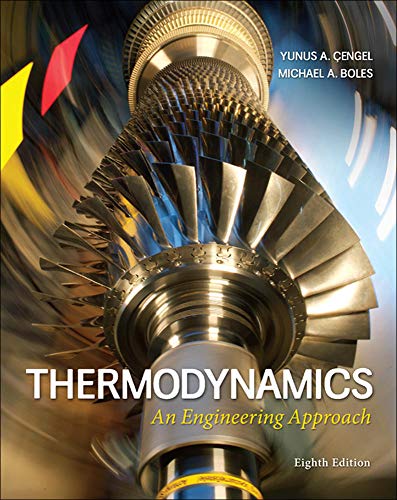 Thermodynamics, An Engineering Approach, eighth edition, covers the basic principles of thermodynamics while presenting a wealth of real-world engineering examples so students get a feel for how thermodynamics is applied in engineering practice. This text helps students develop an intuitive understanding by emphasizing the physics and physical arguments. Cengel and Boles explore the various facets of thermodynamics through careful explanations of concepts and use of numerous practical examples and figures, having students develop necessary skills to bridge the gap between knowledge and the confidence to properly apply their knowledge., McGraw-Hill is proud to offer Connect with the eighth edition of Cengel/Boles, Thermodynamics, An Engineering Approach. This innovative and powerful new system helps your students learn more efficiently and gives you the ability to assign homework problems simply and easily. Problems are graded automatically, and the results are recorded immediately., Track individual student performance - bt question, assignment, or in realtion to the class overall with detailed grade reports. ConnectPlus provides students with all the advantages of Connect, plus 24/7 access to an eBook. Cengel's Thermodynamics, eighth edition, includes the power of McGraw-Hill's LearnSmart a proven adaptive learning system that helps students learn faster, study more efficiently, and retain more knowledge through a series of adaptive questions., This innovative study tool pinpoints concepts the student does not understand and maps out a personalized plan for success.

Yunus A. ï¿engel   is Professor Emeritus of Mechanical Engineering at the University of Nevada, Reno. He received his B.S. in mechanical engineering from Istanbul Technical University and his M.S. and Ph.D. in mechanical engineering from North Carolina State University. His areas of interest are renewable energy, energy efficiency, energy policies, heat transfer enhancement, and engineering education. He served as the director of the Industrial Assessment Center (IAC) at the University of Nevada, Reno, from 1996 to 2000. He has led teams of engineering students to numerous manufacturing facilities in Northern Nevada and California to perform industrial assessments, and has prepared energy conservation, waste minimization, and productivity enhancement reports for them. He has also served as an advisor for various government organizations and corporations.  Dr. ï¿engel is also the author or coauthor of the widely adopted textbooks   Differential Equations for Engineers and Scientists   (2013),   Fundamentals of Thermal-Fluid Sciences   (5th ed., 2017),   Fluid Mechanics: Fundamentals and Applications   (4th ed., 2018),   Thermodynamics: An Engineering Approach   (9th ed., 2019), and   Heat and Mass Transfer: Fundamentals and Applications   (6th ed., 2020), and all published by McGraw-Hill Education. Some of his textbooks have been translated into Chinese (Long and Short Forms), Japanese, Korean, Spanish, French, Portuguese, Italian, Turkish, Greek, Tai, and Basq.  Dr. ï¿engel is the recipient of several outstanding teacher awards, and he has received the ASEE Meriam/Wiley Distinguished Author Award for excellence in authorship in 1992 and again in 2000. Dr. ï¿engel is a registered Professional Engineer in the State of Nevada, and is a member of the American Society of Mechanical Engineers (ASME) and the American Society for Engineering Education (ASEE).

New Page 1 Michael A. Boles is Associate Professor of Mechanical and Aerospace Engineering at North Carolina State University (NCSU), where he earned his Ph.D. in mechanical engineering and is an Alumni Distinguished Professor. Dr. Boles has received numerous awards and citations for excellence as an engineering educator. He is a past recipient of the SAE Ralph R. Teetor Education Award and has been twice elected to the NCSU Academy of Outstanding Teachers. The NCSU ASME student section has consistently recognized him as the outstanding teacher of the year and the faculty member having the most impact on mechanical engineering students.             Dr. Boles specializes in heat transfer and has been involved in the analytical and numerical solution of phase change and drying of porous media. He is a member of the American Society of Mechanical Engineers, the American Society for Engineering Education, and Sigma Xi. Dr. Boles received the ASEE Meriam/Wiley Distinguished Author Award in 1992 for excellence in authorship.

Yunus Cengel (Reno, Nevada) is Professor of Mechanical Engineering at the University of Nevada, Reno.

Descripción Softcover. Condición: New. Brand new book. This is an international edition textbook with identical content as the US version and is usually paperback bound instead of hardcover. We ship all our orders from CA/IL, USA (depending on your address) and NOT from Asia! Buy with confidence from a 5-star US based seller. Choose expedited shipping for superfast delivery with tracking. Nş de ref. del artículo: 297|9780073398174

Descripción soft cover. Condición: New. International Edition. No supplemental materials. International Editions may have a different cover or ISBN but generally have the exact same content as the US edition, just at a more affordable price. In some cases, end of chapter questions may vary slightly from the US edition. International Editions are typically printed in grayscale, and likely will not have any color throughout the book. New. Books ship from multiple locations depending on availability. All orders are shipped with tracking information. We take pride in our customer service. Please contact us if you have any questions regarding this listing. Nş de ref. del artículo: 9445

Descripción Softcover. Condición: New. (SI UNIT INCLUDEDE) ***International Edition***Soft cover/Paperback*** Textbook printed in English. ***Brand New***. Most international edition has different ISBN and Cover design. Some book may show sales disclaimer such as "Not for Sale or Restricted in US" on the cover page but it is absolutely legal to use. All textbook arrives within 5-7business days. Please provides valid phone number with your order with easy delivery. Nş de ref. del artículo: C9780073398174