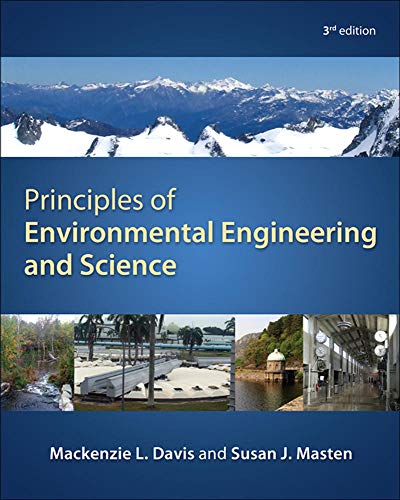 This new edition includes an optional chapter on Biology as well as a thorough updating of environmental standards and a discussion of how those standards are created.

Mackenzie L. Davis, Ph.D., P.E., BCEE, is an Emeritus Professor of Environmental Engineering at Michigan State University. He received all his degrees from the University of Illinois. From 1968 to 1971 he served as a Captain in the U.S. Army Medical Service Corps. During his military service he conducted air pollution surveys at Army ammunition plants. From 1971 to 1973 he was Branch Chief of the Environmental Engineering Branch at the U.S. Army Construction Engineering Research Laboratory. His responsibilities included supervision of research on air, noise, and water pollution control and solid waste management for Army facilities. In 1973, he joined the faculty at Michigan State University. He has taught and conducted research in the areas of air pollution control and hazardous waste management. His honors and awards include the State-of-the-Art Award from the ASCE, Chapter Honor Member of Chi Epsilon, Sigma Xi, election as a Fellow in the Air and Waste Management Association, and election as a Diplomate in the American Academy of Environmental Engi-neers with certification in hazardous waste management. He has received teaching awards from the American Society of Civil Engineers Student Chapter, Michigan State University College of Engineering, North Central Section of the American Society for Engineering Education, Great Lakes Region of Chi Epsilon, and the Amoco Corporation. In 1998, he received the Lyman A. Ripperton Award for distinguished achievement as an educator from the Air and Waste Management Association. In 2007, he was recognized as the Educational Professional of the Year by the Michigan Water Environment Association. He is a registered professional engineer in Michigan. Dr. Davis is the author of a student and professional edition of Water and Wastewater Engineering and co-author of Introduction to Environmental Engineering with Dr. David Cornwell. In 2003, Dr. Davis retired from Michigan State University.

Descripción Softcover. Condición: New. ***International Edition***Soft cover/Paperback*** Textbook printed in English. ***Brand New***. Most international edition has different ISBN and Cover design. Some book may show sales disclaimer such as "Not for Sale or Restricted in US" on the cover page but it is absolutely legal to use. All textbook arrives within 5-7business days. Please provides valid phone number with your order with easy delivery. Nş de ref. del artículo: C9780073397900

2. Principles of Environmental Engineering and Science

3. Principles of Environmental Engineering and Science

Descripción soft cover. Condición: New. International Edition. No supplemental materials. International Editions may have a different cover or ISBN but generally have the exact same content as the US edition, just at a more affordable price. In some cases, end of chapter questions may vary slightly from the US edition. International Editions are typically printed in grayscale, and likely will not have any color throughout the book. New. Books ship from multiple locations depending on availability. All orders are shipped with tracking information. We take pride in our customer service. Please contact us if you have any questions regarding this listing. Nş de ref. del artículo: 9436