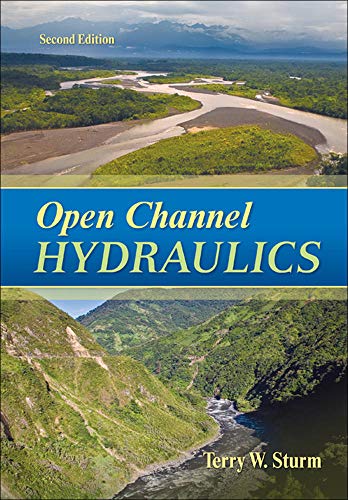 Open Channel Hydraulics is intended for advanced undergraduates and first-year graduate students in the general fields of water resources and environmental engineering. It offers a focused presentation of some of the most common problems encountered by practicing engineers with the inclusion of recent research advances and personal computer applications. In addition, emphasis is placed on the application of basic principles of fluid mechanics to the formulation of open channel flow problems so that the assumption and limitation of existing numerical models are made clear.

Terry Sturm (d. 2009) was a professor of English at the University of Auckland and a leading critic and scholar of New Zealand and Australian writing. He was the editor of The Oxford History of New Zealand Literature (1991, 1998) .

Descripción Soft cover. Condición: New. 2nd Edition. Brand New International Edition textbook. Some book may show sales disclaimer such as "Not for Sale or Restricted in US" on the cover page but it is absolutely legal to use in US or Canada. Ship from Multiple Locations, including Asia , Hong Kong ,Taiwan , US or Canada depend on stock location. Nş de ref. del artículo: 000348

Descripción Softcover. Condición: New. ***International Edition***Soft cover/Paperback*** Textbook printed in English. ***Brand New***. Most international edition has different ISBN and Cover design. Some book may show sales disclaimer such as "Not for Sale or Restricted in US" on the cover page but it is absolutely legal to use. All textbook arrives within 5-7business days. Please provides valid phone number with your order for easy delivery. Nş de ref. del artículo: 9780073397870

Descripción soft cover. Condición: New. International Edition. No supplemental materials. International Editions may have a different cover or ISBN but generally have the exact same content as the US edition, just at a more affordable price. In some cases, end of chapter questions may vary slightly from the US edition. International Editions are typically printed in grayscale, and likely will not have any color throughout the book. New. Books ship from multiple locations depending on availability. All orders are shipped with tracking information. We take pride in our customer service. Please contact us if you have any questions regarding this listing. Nş de ref. del artículo: 9434