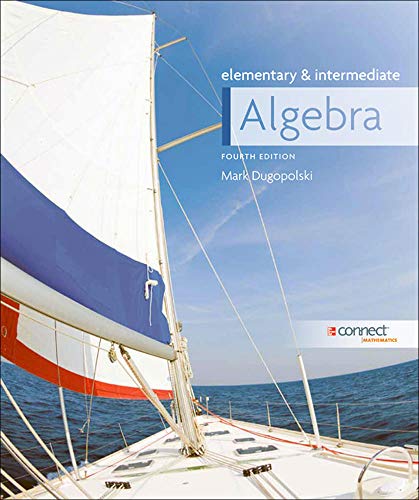 The Dugopolski series in developmental mathematics has helped thousands of students succeed in their developmental math courses. Elementary & Intermediate Algebra, 4e is part of the latest offerings in the successful Dugopolski series in mathematics. In his books, students and faculty will find short, precise explanations of terms and concepts written in clear, understandable language that is mathematically accurate. Dugopolski also includes a double cross-referencing system between the examples and exercise sets, so no matter where the students start, they will see the connection between the two. Finally, the author finds it important to not only provide quality but also a wide variety and quantity of exercises and applications.

Mark Dugopolski was born and raised in Menominee, Michigan. He received a degree in mathematics education from Michigan State University and then taught high school mathematics in the Chicago area. While teaching high school, he received a master's degree in mathematics from Northern Illinois University. He then entered a doctoral program in mathematics at the University of Illinois in Champaign, where he earned his doctorate in topology in 1977. He was then appointed to the faculty at Southeastern Louisiana University, where he now holds the position of professor of mathematics. He has taught high school and college mathematics for over 30 years. He is a member of the MAA, the AMS, and the AMATYC. He has written many articles and mathematics textbooks. He has a wife and two daughters. When he is not working, he enjoys hiking, bicycling, jogging, tennis, fishing, and motorcycling.