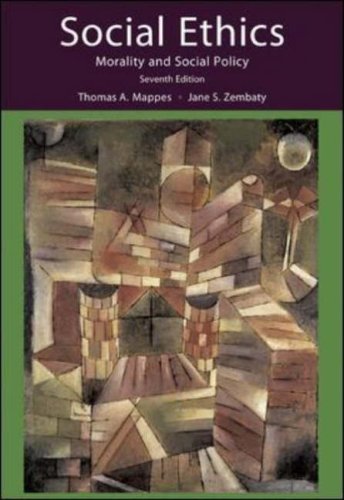 In its seventh edition, Social Ethics: Morality and Social Policy continues to provide material that will encourage reflective and critical examination of key contemporary moral problems. With additional readings and a new organization that groups related chapters together under four categories, this edition enhances the teachability that was the most salient characteristic of previous editions. The text maintains its ability to bring the central issues into clear focus, while allowing supporting arguments for widely diverse positions to be presented by those who embrace them.

Thomas A. Mappes holds a B.S. in chemistry from the University of Dayton and a Ph.D. in philosophy from Georgetown University. He is professor of philosophy at Frostburg State University, where he has taught since 1973. He is the coeditor (with Jane S. Zembaty) of Social Ethics: Morality and Social Policy (McGraw-Hill, 4/e, 1992) and his published work appears in journals such as American Philosophical Quarterly and Kennedy Institute of Ethics Journal. In 1985, the Frostburg State University Foundation presented him with the Faculty Achievement Award for Teaching.

Jane S. Zembaty, professor of philosophy at the university of Dayton, specializes in classical Greek philosophy and social ethics. She coedited the first three editions of Biomedical Ethics, and her published work includes articles on Greek philosophy, such as "Plato's Republic and Greek Morality on Lying" and "Aristotle on Lying."