Artículos relacionados a Foundations in Singing 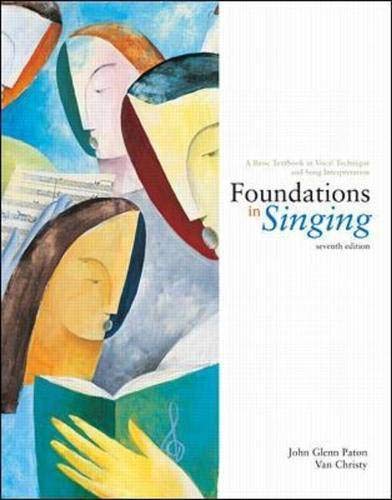 A practical, effective combination of textbook and song anthology, Foundations in Singing helps students master the essentials of vocal technique. Addressing the particular needs of beginners, the positive language provides encouragement while the solid pedagogy and wide selction of songs promote understanding.

John Glenn Paton grew up in a musical home in New Castle, Pa. He studied at the Cincinnati Conservatory of Music under Franklin Bens and Sonia Essin. After military service he studied further at the Eastman School of Music under Julius Huehn. Through both Essin and Huehn he traces his vocal lineage to Anna Schoen-Renďż and through her to Pauline Viardot-Garcďża.

In California since 1986, Paton taught class voice to acting students at the American Academy of Dramatic Arts, Pasadena. In 1989 he joined the faculty of the University of Southern California. He celebrated his 60th birthday by giving a solo recital, and he continues to perform occasionally.

Paton has edited song collections for G. Schirmer, Leyerle Publications and Alfred Publishing Co. Voice studios around the world use his books, including works translated into Japanese and Korean.

Foundations in Singing Paton, John Glenn and Christy, Van A