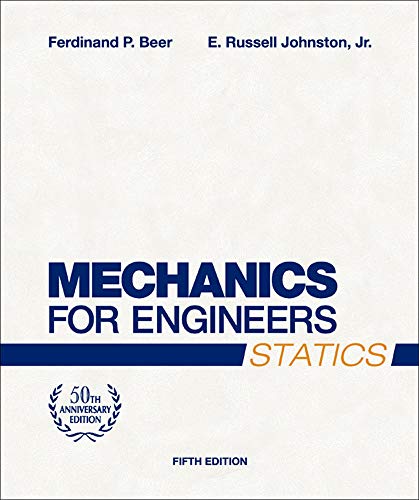 The first book published in the Beer and Johnston Series, Mechanics for Engineers: Statics is a scalar-based introductory statics text, ideally suited for engineering technology programs, providing first-rate treatment of rigid bodies without vector mechanics. This new edition provides an extensive selection of new problems and end-of-chapter summaries. The text brings the careful presentation of content, unmatched levels of accuracy, and attention to detail that have made Beer and Johnston texts the standard for excellence in engineering mechanics education.

Born in France and educated in France and Switzerland, Ferdinand Beer held an M.S. degree from the Sorbonne and an Sc.D. degree in theoretical mechanics from the University of Geneva. He came to the United States after serving in the French army during the early part of World War II and taught for four years at Williams College in the Williams-MIT joint arts and engineering program. Following his service at Williams College, Beer joined the faculty of Lehigh University, where he taught for thirty-seven years. He held several positions, including the University Distinguished Professors Chair and Chairman of the Mechanical Engineering and Mechanics Department. In 1995, Beer was awarded an honorary Doctor of Engineering degree by Lehigh University.

Descripción soft cover. Condición: New. International Edition. No supplemental materials. International Editions may have a different cover or ISBN but generally have the exact same content as the US edition, just at a more affordable price. In some cases, end of chapter questions may vary slightly from the US edition. International Editions are typically printed in grayscale, and likely will not have any color throughout the book. New. Books ship from multiple locations depending on availability. All orders are shipped with tracking information. We take pride in our customer service. Please contact us if you have any questions regarding this listing. Nş de ref. del artículo: 9121