Artículos relacionados a Teaching Science to Children: An Inquiry Approach 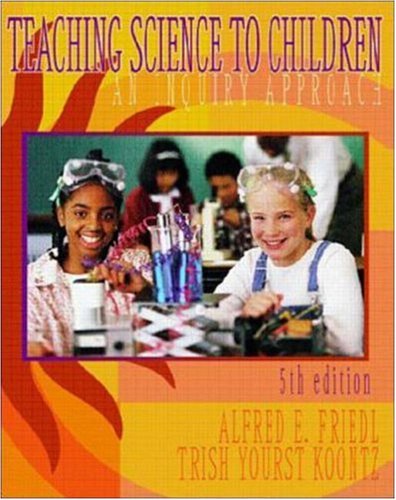 This is a comprehensive, easy-to-use text containing more than 300 science teaching activities, 30 of which are new to this edition. This book's focus on the inquiry approach places value on the student's thinking and doing science, and ties the text to the inquiry-oriented National Science Education Standards for science teaching issued by the National Research Council. Each of the inquiry activities contains combined discussions of methods and content. This text helps students overcome science anxiety and shows them how easy it is to teach science using a simple, consistent three-step approach to each of the science activities (set induction, investigation, and resolution). All activities use simple, easy-to-find materials. Over 250 pieces of line art clearly illustrate the teaching activities.

Alfred E. Friedl is Emeritus Professor of Education at Kent State University. He received the first eight years of his education in a one-room elementary school in Minnesota. He attended high school in Albany, Minnesota, and received an undergraduate degree from Saint Cloud State College. Professor Friedl began his teaching career as an elementary school teacher in Minnesota and California. After receiving his doctorate in Education from Colorado State University, he served as a curriculum coordinator for the San Diego County Department of Education. He also taught extension classes for San Diego State University and UCLA. He later moved to Kent State University where he taught for twenty-five years. In addition to winning an "outstanding teacher" award from Kent State, he also won a national teaching award for writing and presenting a 13-week television series entitled, "Teaching Children about Space Science." Professor Friedl has written extensively for more than three decades--authoring or co-authoring more than twenty books. He co-authored his first book, YOUR SCIENCE FAIR, while still a sixth grade teacher. His most recent books include MODERN PHYSICAL SCIENCE and EXERCISES AND INVESTIGATIONS, both high school science textbooks. Tricia Koontz is an associate professor of Mathematics and Science Education at Kent State University in the College of Education. She received her Ph.D. in education from Kent State University where she has been on the faculty since 1983. A former elementary, middle, and high school teacher, she has authored or co-authored several chapters and articles dealing with her special interests in the teaching and learning of mathematics and science as well as gender equity issues in education. She has received several teaching awards including a Best Practices Award from the State of Ohio for her National Science Foundation grant project.