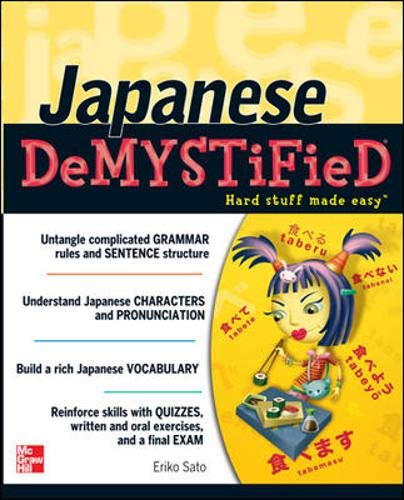 This easy-to-use guide from the popular. Demystified series takes the mystery and menace out of learning Japanese by walking readers step-by-step through the fundamentals of the language. Each chapter concludes with a self-test that allows readers to track their progress and a comprehensive final exam at the end of the book gives instant feedback on new language skills.

Japanese Demystified lets readers work at their own pace and arms them with the essentials of the language in a friendly and un-intimidating format.

The Japanese in the book is presented in both Japanese characters (hiragana, katagana, and kanji) and phonetic translation for easy pronunciation

Eriko Sato, Ph.D., is the executive director of the Japan Center and the founding director of the Pre-College Japanese Language Program at The University of New York at Stony Brook. She is the author of Contemporary Japanese and Japanese For Dummies.