Artículos relacionados a The Pomo Tarot 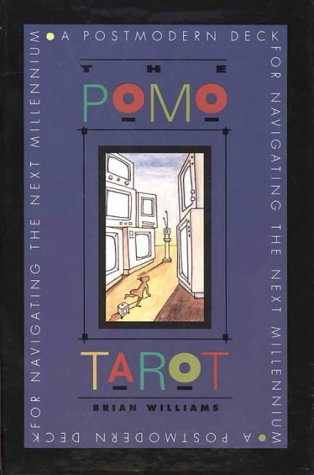 Postmodernism has already swept all the major artistic disciplines: art, architecture, literature, dance and music. Brian Williams offers a postmodern twist to the tarot. Each card of the Minor Arcana has been inspired by a modern artwork, while the traditional suits of the Minor Arcana (staves, cups, coins and swords) are transformed into TVs, bottles, guns and money-icons with meaning for 21st-century readers. Among the 22 cards of the major Arcana, the traditional, Jester-like Fool has become a trendy idiot, the Magician has become a scientific expert and the Empress and Emperor have become Mum and Dad. A companion guidebook is included.

IT'S ALMOST 2000 A.D.
DOES YOUR TAROT DECK SEEM MORE SUITED FOR A RENAISSANCE COURT OR A GYPSY TENT THAN FOR NAVIGATING THE NEXT MILLENNIUM?

A witty blend of traditional tarot symbology, contemporary images, and the iconography of modern art, The PoMo Tarot puts a hip new spin on an ancient source of wisdom and offers art lovers and tarot devotees a treasure chest of up-to-the-minute totems for twenty-first century divination and self-exploration.

Turning the ancient deck on its head, artist and tarot expert Brian Williams replaces the classic suits of the Minor Arcana (staves, cups, coins and swords) with TVs, bottles, money and guns, translating the tarot and its powers into the contemporary landscape. To wit: a Scientist replaces the magician and the village fool puts on the power tie of a trendy idiot. Aficionados will delight in Williams brazen takes on a who's who of paintings and artists. This beautiful slipcased edition includes a full-colour 78-card deck as well as a guidebook that comments on the history of each tarot card and the artist it parodies, and explains how to muse the deck for readings.

Brian Williams created the Renaissance Tarot Deck and the companion book. He holds a degree in Renaissance Iconographic Studies from the University of California, Berkeley.

1. The Pomo Tarot: A Postmodern Deck for Navigating the Next Millennium

2. The Pomo Tarot: A Postmodern Deck for Navigating the Next Millennium