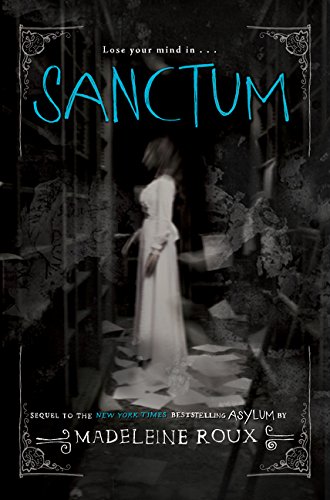 The sequel to New York Times bestseller ASYLUM, SANCTUM follows Dan and his friends back to Brookline, where they are determined to find closure from their haunted past. With more mind-bending revelations, thrilling action, and creepy found photographs, SANCTUM wil keep readers guessing until the very end.

Back at their high schools, Dan, Abby, and Jordan are plagued with nightmares about their traumatic summer in the Brookline asylum. Abby and Jordan just want to forget about it all, but Dan is convinced the only way to get over what happened is to return to campus and close the case once and for all - especially after he gets a letter from his old roommate, Felix, with a string of cryptic numbers that correspond to addresses around Camford. So the three friends return to New Hampshire college for a prospective students weekend around Halloween, and they are paired with three undergrad hosts who promise to take them to sample classes and even a few parties.

But on the very first campus tour, a prospective student in the group stares eerily at Dan, then promptly tries to throw himself out of a second story window. And as the weekend continues, other college students aren't acting like themselves, either. Sneaking away from the group, Dan and his friends track down the houses from Felix's letter, and find old photos and letters from the town's twisted past - some that predate the asylum, from when Warden Crawford was still a child obsessed with a creepy carnival that came to town, and some from when the asylum closed down, and all its allegedly cured patients were let loose in the town. Those patients include a man who went on to become the Postman, a man who lured girls into Camford in the 70's for a cult-like group - girls that were never seen again.

Finally, Dan discovers that this cult never left Camford, and some of its members are actually students at NHC, led by the professor who tried to trap the friends in the asylum over the summer. It seems the Warden's experiments on patients were influenced by the dark brand of hypnosis he learned as a kid at the carnival. And with a number of college students under the Warden's control, Dan and his friends have fallen right into his years-long trap. Now they can only hope to make it out of this campus visit weekend alive.

Madeleine Roux is the author of Allison Hewitt Is Trapped and Sadie Walker Is Stranded. She is a Minnesota native and proud graduate of Beloit College. Madeleine lives and works in California.

Descripción Harper & Row Limited. Paperback. Condición: Good. A copy that has been read, but remains in clean condition. All pages are intact, and the cover is intact. The spine may show signs of wear. Pages can include limited notes and highlighting, and the copy can include previous owner inscriptions. The dust jacket is missing. At ThriftBooks, our motto is: Read More, Spend Less. Nş de ref. del artículo: G0062351826I3N01

Descripción HarperCollins, 2014. Condición: Good. A+ Customer service! Satisfaction Guaranteed! Book is in Used-Good condition. Pages and cover are clean and intact. Used items may not include supplementary materials such as CDs or access codes. May show signs of minor shelf wear and contain limited notes and highlighting. Nş de ref. del artículo: 0062351826-2-4