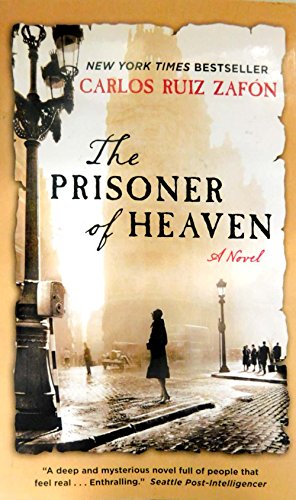 Once again, internationally acclaimed, New York Times bestselling author Carlos Ruiz Zafón takes us into a dark, gothic Barcelona and creates a rich, labyrinthine tale of love, literature, passion, and revenge in which the heroes of THE SHADOW OF THE WIND and THE ANGEL'S GAME must contend with a nemesis that threatens to destroy them.

Barcelona,1957. It is Christmas, and Daniel Sempere and his wife Bea have much to celebrate. They have a beautiful new baby son named Julian, and their close friend Fermín Romero de Torres is about to be wed. But their joy is eclipsed when a mysterious stranger visits the Sempere bookshop and threatens to divulge a terrible secret that has been buried for two decades in the city's dark past. His appearance plunges Fermín and Daniel into a dangerous adventure that will take them back to the 1940's and the dark early days of Franco's dictatorship. The terrifying events of that time launch them on a journey fraught with jealousy, suspicion, vengeance, and lies, a search for the truth that will put into peril everything they love and ultimately transform their lives.

Full of intrigue and emotion, THE PRISONER OF HEAVEN is a majestic novel in which the threads of THE SHADOW OF THE WIND and THE ANGEL'S GAME converge under the spell of literature and bring us toward the enigma of the mystery hidden at the heart of the Cemetery of Forgotten Books, a collection of lost treasures known only to its few initiates and the very core of Carlos Ruiz Zafón's enchanting fictional world.

1. The Prisoner of Heaven

Descripción Mass Market Paperback. Condición: Used; Acceptable. Dispatched, from the UK, within 48 hours of ordering. The book is perfectly readable and fit for use, although it shows signs of previous ownership. The spine is likely creased and the cover scuffed or slightly torn. Textbooks will typically have an amount of underlining and/or highlighting, as well as notes. If this book is over 5 years old, then please expect the pages to be yellowing or to have age spots. Damaged cover. The cover of is slightly damaged for instance a torn or bent corner. Grubby book may have mild dirt or some staining, mostly on the edges of pages. Nş de ref. del artículo: CHL6806219

2. The Prisoner of Heaven

Descripción Paperback. Condición: Very Good. The book has been read, but is in excellent condition. Pages are intact and not marred by notes or highlighting. The spine remains undamaged. Nş de ref. del artículo: GOR004975525

3. The Prisoner of Heaven

Descripción Mass Market Paperback. Condición: Used; Good. **Simply Brit** Shipped with Premium postal service within 24 hours from the UK with impressive delivery time. We have dispatched from our book depository; items of good condition to over ten million satisfied customers worldwide. We are committed to providing you with reliable and efficient service at all times. Nş de ref. del artículo: 1408887

4. The Prisoner of Heaven

5. The Prisoner of Heaven

6. The Prisoner of Heaven

7. The Prisoner of Heaven