Artículos relacionados a The Power of Six

Lore, Pittacus The Power of Six 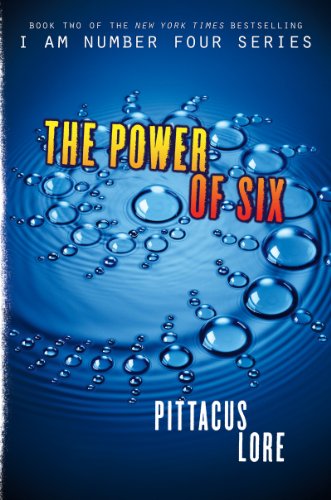 The action is taut, the characters are fascinating, and the fact that the teens are slowly finding one another and learning about Lorien secrets is sure to yield an impressive all-out battle down the road. This series continues to head in interesting directions. --Bulletin of the Center for Children's Books

Lore picks up and expands on a strong premise that originated in the first novel. An intriguing potential romantic triangle brewing between John, Six, and Sam adds layers as they search for answers. --Voice of Youth Advocates (VOYA)

This is the second installment in the thrilling, action-packed Lorien Legacies series that launched with the #1 New York Times bestseller I AM NUMBER FOUR (an Autumn 2010 Kids Indie Next List pick and a major motion picture from Dreamworks!), and the heart-pounding suspense has never been higher. Now John Smith is joining forces with some of his lost companions as they battle against the alien force bent on eliminating them.

In the beginning they were a group of nine. Nine aliens who left their home planet of Lorien when it fell under attack by the evil Mogadorians, who scattered on Earth and went into hiding, who look like ordinary teenagers, but who have extraordinary skills. The Mogadorians killed Number One, Number Two, and Number Three. They tried to kill Number Four, John Smith ...and failed.

Following a massive battle at the end of I AM NUMBER FOUR that proved that the Mogadorians have found him at last, John joined forces with Number Six. Now the fate of Lorien--and Earth--rests in the hands of these two teens.

Already John and Six have inspired a fellow Lorien--Marina, Number Seven--who has been hiding in Spain. She's been following the news of what's happening in the US, and she's certain it's the sign she's been waiting for.

The Power of Six (Lorien Legacies)

Descripción Paperback. Condición: Very Good. The book has been read, but is in excellent condition. Pages are intact and not marred by notes or highlighting. The spine remains undamaged. Nş de ref. del artículo: GOR005512469

Descripción Paperback. Condición: Very Good. Shipped within 24 hours from our UK warehouse. Clean, undamaged book with no damage to pages and minimal wear to the cover. Spine still tight, in very good condition. Remember if you are not happy, you are covered by our 100% money back guarantee. Nş de ref. del artículo: 6545-9780062218582

Descripción Condición: Very Good. This book is in very good condition and will be shipped within 24 hours of ordering. The cover may have some limited signs of wear but the pages are clean, intact and the spine remains undamaged. This book has clearly been well maintained and looked after thus far. Money back guarantee if you are not satisfied. See all our books here, order more than 1 book and get discounted shipping. . Nş de ref. del artículo: 7719-9780062218582

The Power of Six (Lorien Legacies)

Descripción Condición: Good. A+ Customer service! Satisfaction Guaranteed! Book is in Used-Good condition. Pages and cover are clean and intact. Used items may not include supplementary materials such as CDs or access codes. May show signs of minor shelf wear and contain limited notes and highlighting. Nş de ref. del artículo: 0062218581-2-4