Artículos relacionados a Leaf Storm: And Other Stories (Perennial Classics) 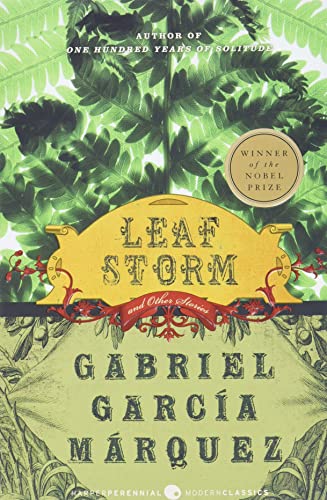 "For Garcí a Má rquez the world contains mysteries that we need and can easily live with, but also miracles that we cannot understand, that speak for forces unknown to men. 'Leaf Storm, ' then, brings together both Garcí a Má rquez's early and late styles. The former deserves our respect; the latter requires our celebration."-- Peter S. Prescott, "Newsweek""To call these allegories would be to suggest that they are 'symbolic' somehow and perhaps plainly stated. They ore not; the texture is that of the prose poem, and the intention a restatement of religious belief. But the feeling one comes away with is that of enchantment, which is a sense of having endured terror and magic." -- Paul Theroux, "Chicago Tribune""Garcí a Má rquez has extraordinary strength and firmness of imagination and writes with the calmness of a man who knows exactly what wonders he can perform. Strange things happen in the land of Má rquez. As with Emerson, Poe, Hawthorne, every sentence breaks the silence of a vast emptiness, the famous New World 'solitude' that is the unconscious despair of his characters but the sign of Má rquez's genius." -- Alfred Kazin, "The New York Times Book Review"

In a new edition of the Nobel laureate's first book, seven short stories, including the title story, "The Handsomest Drowned Man in the World," "A Very Old Man with Enormous Wings," "The Last Voyage of the Ghost Ship," and "Nabo," reflect the author's concern with the complexities of human nature. Reissue. 15,000 first printing.

LEAF STORM: AND OTHER STORIES (P