Artículos relacionados a The Competitive Advantage of Nations and Their Fir

Porter The Competitive Advantage of Nations and Their Fir

The Competitive Advantage of Nations and Their Fir 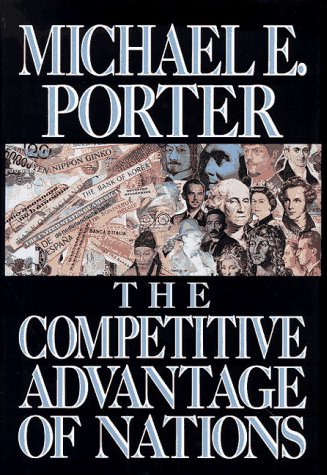 With the publication of his best-selling books "Competitive Strategy (1980) and "Competitive Advantage (1985), Michael E. Porter of the Harvard Business School established himself as the world's leading authority on competitive advantage. Now, at a time when economic performance rather than military might will be the index of national strength, Porter builds on the seminal ideas of his earlier works to explore what makes a nation's firms and industries competitive in global markets and propels a whole nation's economy. In so doing, he presents a brilliant new paradigm which, in addition to its practical applications, may well supplant the 200-year-old concept of "comparative advantage" in economic analysis of international competitiveness. To write this important new work, Porter and his associates conducted in-country research in ten leading nations, closely studying the patterns of industry success as well as the company strategies and national policies that achieved it. The nations are Britain, Denmark, Germany, Italy, Japan, Korea, Singapore, Sweden, Switzerland, and the United States. The three leading industrial powers are included, as well as other nations intentionally varied in size, government policy toward industry, social philosophy, and geography. Porter's research identifies the fundamental determinants of national competitive advantage in an industry, and how they work together as a system. He explains the important phenomenon of "clustering," in which related groups of successful firms and industries emerge in one nation to gain leading positions in the world market. Among the over 100 industries examined are the German chemical and printing industries, Swisstextile equipment and pharmaceuticals, Swedish mining equipment and truck manufacturing, Italian fabric and home appliances, and American computer software and movies. Building on his theory of national advantage in industries and clusters, Porter identifies the stages of competitive development through which entire national economies advance and decline. Porter's finding are rich in implications for both firms and governments. He describes how a company can tap and extend its nation's advantages in international competition. He provides a blueprint for government policy to enhance national competitive advantage and also outlines the agendas in the years ahead for the nations studied. This is a work which will become the standard for all further discussions of global competition and the sources of the new wealth of nations.