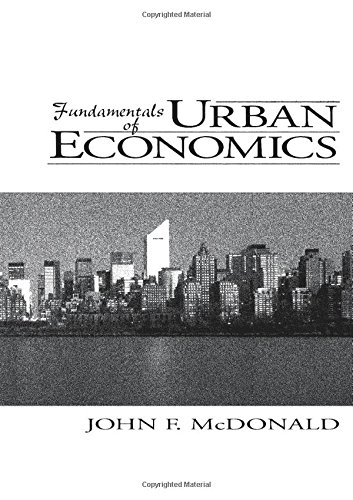 For Urban and Regional Economics courses. This is the first modern text in urban economics that emphasizes urban economic growth. It approaches the various aspects of urban economics as part of a coherent whole rather than as separate isolated topics, and emphasizes the fundamental methods, models, and data used by economists to study cities.

John F. McDonald is Senior Associate Dean for Academic Affairs and Professor of Economics at the University of Illinois at Chicago. He is US editor of the journal "Urban Studies" and a member of the editorial boards of the" Journal of Urban Economics" and the journal "Planning Perspectives," He has authored or edited several books, including "The Economics of Highway Congestion and Pricing" (1999), "Sources of Metropolitan Growth" (with Edwin Mills, 1991), and "Economic Analysis of an Urban Housing Market" (1979).

Daniel P. McMillen is Professor of Economics and Director of the Center for Urban Real Estate at the University of Illinois at Chicago, and is also a Research Scholar at the Federal Reserve Bank of Chicago. He is a member of the editorial boards of several urban economics and real estate journals, including the "Journal of Urban Economics" and "Real Estate Economics," and is co-editor, with Richard J. Arnott, of "A Companion to Urban Economics" (Blackwell, 2006).

Descripción Paperback. Condición: As New. No Jacket. Pages are clean and are not marred by notes or folds of any kind. ~ ThriftBooks: Read More, Spend Less. Nş de ref. del artículo: G0023788526I2N00

Descripción Paperback. Condición: Good. Item is in good condition. Some moderate creases and wear. This item may not come with CDs or additional parts including access codes for textbooks. Might be an ex-library copy and contain writing/highlighting. Photos are stock pictures and not of the actual item. Nş de ref. del artículo: DS-0023788526-3