Artículos relacionados a An Ember In The Ashes 1 (HarperVoyager)

Tahir, Sabaa An Ember In The Ashes 1 (HarperVoyager)

An Ember In The Ashes 1 (HarperVoyager) 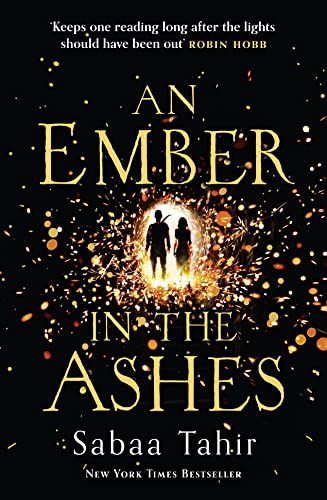 ‘Tahir shows us light in darkness, hope in a world of despair, and the human spirit reaching for greatness in difficult times’ BRANDON SANDERSON

‘AN EMBER IN THE ASHES is a spectacular page turner that asks readers to consider how far they’d go to save the ones they love. Sabaa Tahir is the next superstar in young adult fiction and her debut is as cinematic as Gladiator and as high-stakes as Game of Thrones’ Holly Goldberg Sloan, New York Times bestselling author of COUNTING BY 7S and I’LL BE THERE

‘Blew me away...This book is dark, complex, vivid, and romantic―expect to be completely transported’ MTV.com

Read the explosive New York Times bestselling debut that’s captivated readers worldwide. Set to be a major motion picture, An Ember in the Ashes is the book everyone is talking about.

Under the Martial Empire, defiance is met with death.

When Laia’s grandparents are brutally murdered and her brother arrested for treason by the empire, the only people she has left to turn to are the rebels.

But in exchange for their help in saving her brother, they demand that Laia spy on the ruthless Commandant of Blackcliff, the Empire’s greatest military academy. Should she fail it’s more than her brother’s freedom at risk . . . Laia’s very life is at stake.

There, she meets Elias, the academy’s finest soldier. But Elias wants only to be free of the tyranny he’s being trained to enforce. He and Laia will soon realize that their destinies are intertwined – and that their choices will change the fate of the Empire itself.

4. An Ember in the Ashes

Descripción Condición: Good. A+ Customer service! Satisfaction Guaranteed! Book is in Used-Good condition. Pages and cover are clean and intact. Used items may not include supplementary materials such as CDs or access codes. May show signs of minor shelf wear and contain limited notes and highlighting. Nş de ref. del artículo: 0008164436-2-4

5. An Ember in the Ashes