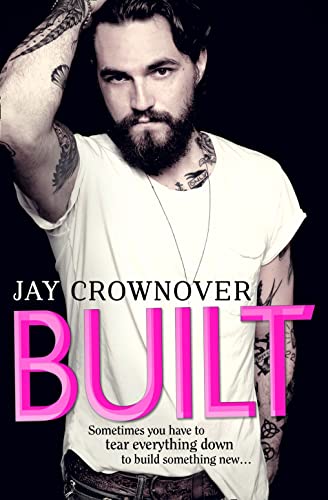 ‘The characters of Crownover's Marked Men series are all outlandishly colorful and irresistibly passionate, while still being so genuine that their stories become unforgettable’ RT BOOK REVIEWS

The first in the new SAINTS OF DENVER series from NYT bestselling author of the MARKED MEN series, Jay Crownover

Sometimes you have to tear everything down to build something new...

Sayer Cole is frozen inside. At least, that’s what it’s felt like for as long as she can remember. She’s yet to let anyone past her icy exterior – and the one guy she thinks might melt her heart couldn’t possibly be interested in someone so uptight.

Rough, hard and hot-as-hell, Zeb Fuller has rebuilt his life and his construction business since protecting his family sent him to jail all those years ago. His elegant client, Sayer, makes him feel like a Neanderthal in denim, but despite the many hints that he’s been dropping to get to know her better, she seems oblivious to his charms.

Just as things finally start to heat up, Zeb’s past comes back to haunt him and he needs Sayer’s professional help to right a wrong and to save more than himself. As these opposites dig in for the fight of their lives, fire and ice collide in an unstoppable explosion of steam...

Descripción Paperback. Condición: Very Good. All orders are dispatched the following working day from our UK warehouse. Established in 2004, we have over 500,000 books in stock. No quibble refund if not completely satisfied. Nş de ref. del artículo: mon0005711000

Descripción Paperback. Condición: Used; Good. **Simply Brit** Shipped with Premium postal service within 24 hours from the UK with impressive delivery time. We have dispatched from our book depository; items of good condition to over ten million satisfied customers worldwide. We are committed to providing you with reliable and efficient service at all times. Nş de ref. del artículo: 2888167

Descripción Paperback. Condición: Very Good. The book has been read, but is in excellent condition. Pages are intact and not marred by notes or highlighting. The spine remains undamaged. Nş de ref. del artículo: GOR007228651

Descripción Paperback. Condición: Good. The book has been read but remains in clean condition. All pages are intact and the cover is intact. Some minor wear to the spine. Nş de ref. del artículo: GOR007343931