Artículos relacionados a An Ember in the Ashes (Ember Quartet, Book 1)

Tahir, Sabaa An Ember in the Ashes (Ember Quartet, Book 1)

An Ember in the Ashes (Ember Quartet, Book 1) 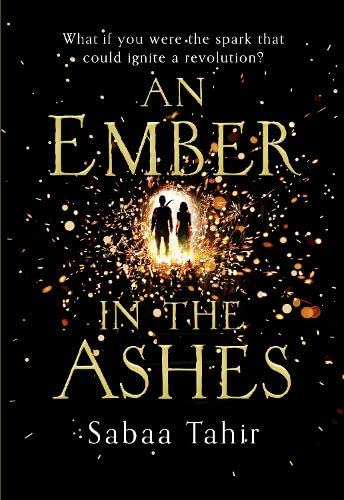 ‘Game of Thrones fans will relish Tahir’s debut set in a brutal Rome-inspired empire. It follows Laia, a slave and Elias, a young soldier, whose lives are unexpectedly intertwined in this story of freedom, loyalty and love’ Independent

‘AN EMBER IN THE ASHES is a spectacular page turner that asks readers to consider how far they’d go to save the ones they love. Sabaa Tahir is the next superstar in young adult fiction and her debut is as cinematic as Gladiator and as high-stakes as Game of Thrones’ Holly Goldberg Sloan, New York Times bestselling author of COUNTING BY 7S and I’LL BE THERE

‘Blew me away...This book is dark, complex, vivid, and romantic―expect to be completely transported’ MTV.com

Read the explosive New York Times bestselling debut that’s captivated readers worldwide. Set to be a major motion picture, An Ember in the Ashes is the book everyone is talking about.

What if you were the spark that could ignite a revolution?

For years Laia has lived in fear. Fear of the Empire, fear of the Martials, fear of truly living at all. Born as a Scholar, she’s never had much of a choice.

For Elias it’s the opposite. He has seen too much on his path to becoming a Mask, one of the Empire’s elite soldiers. With the Masks’ help the Empire has conquered a continent and enslaved thousands of Scholars, all in the name of power.

When Laia’s brother is taken she must force herself to help the Resistance, the only people who have a chance of saving him. She must spy on the Commandant, ruthless overseer of Blackcliff Academy. Blackcliff is the training ground for Masks and the very place that Elias is planning to escape. If he succeeds, he will be named deserter. If found, the punishment will be death.

But once Laia and Elias meet, they find that their destinies are intertwined and that their choices will change the fate of the Empire.

In the ashes of a broken world one person can make a difference. One voice in the dark can be heard. The price of freedom is always high and this time that price might demand everything, even life itself.

Descripción Paperback. Condición: Very Good. The book has been read, but is in excellent condition. Pages are intact and not marred by notes or highlighting. The spine remains undamaged. Nş de ref. del artículo: GOR006970617

Descripción Paperback. Condición: Good. The book has been read but remains in clean condition. All pages are intact and the cover is intact. Some minor wear to the spine. Nş de ref. del artículo: GOR007181652

Descripción Paperback. Condición: Fair. A readable copy of the book which may include some defects such as highlighting and notes. Cover and pages may be creased and show discolouration. Nş de ref. del artículo: GOR007761728