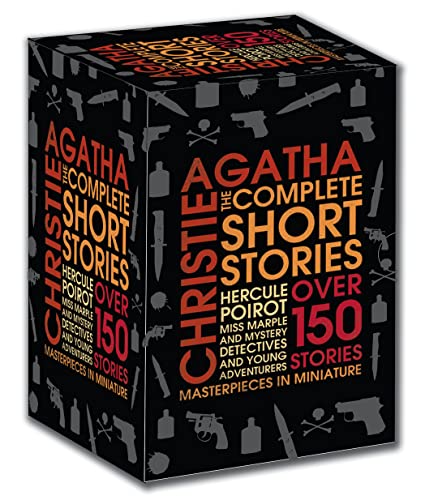 ‘The plots are so good that one marvels ... most of them would have made a full length thriller.’ Daily Mirror

‘I have often thought that Mrs Christie was not so much the best as the only living writer of the true of classic detective story.’ Margery Allingham

A boxed set of three bumper volumes containing every Agatha Christie story published in her UK books – a total of 159 stories, including a few rarities exclusive to these volumes.

Hercule Poirot made his first appearance in a short story in The Sketch magazine in March 1923, and so it was for most of Agatha Christie's short stories, published first in weekly and monthly magazines and helping her to build an army of fans through her superb short stories. Some would feature Poirot or Miss Marple, others would allow her the freedom to experiment with new characters or simply write ingenious one-off mysteries that would challenge the reader as much as any of her detectives.

Now, every one of Agatha Christie's published short stories have been brought together in this impressive collection. For the first time, this trilogy contains all the short stories published in book form in the UK , perfectly illustrating the true breadth of her talent. From suspense-ridden cases of murder, robbery and blackmail to macabre tales of the supernatural, these books includes some of her very best plots, dubbed ‘Masterpieces in Miniature” and presented in the order they first appeared.

Each book includes bonus items: HERCULE POIROT includes an early version of a story not published since 1936, “Poirot and the Regatta Mystery”; MISS MARPLE AND MYSTERY includes a rare introduction to “The Thirteen Problems” not available anywhere else; and DETECTIVES AND YOUNG ADVENTURERS contains four early Poirot stories which are variations of those in the Poirot volume, plus Agatha Christie’s six rare Christmas stories for children, including “Star Over Bethlehem” and “The Naughty Donkey”.