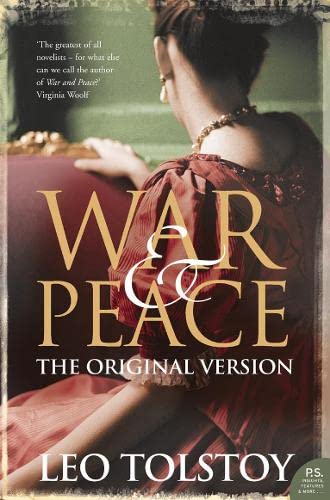 ‘The greatest of all novelists – for what else can we call the author of “War and Peace”?’ Virginia Woolf

‘The pure narrative power of Tolstoy's work is unequalled. To read him is to find one's way home, to everything within us that is fundamental and sane.’ Thomas Mann

‘What an artist and what a psychologist! It seems to me there are some passages worthy of Shakespeare. I found myself crying out in admiration while reading.’ Gustave Flaubert

A new version – the one Tolstoy originally intended, but has been hitherto unpublished – of Russia’s most famous novel; with a different ending, fewer digressions and an altered view of Napoleon – it’s time to look afresh at one of the world’s favourite books.

‘War and Peace’ is a masterpiece – a panoramic portrait of Russian society and its descent into the Napoleonic Wars which for over a century has inspired reverential devotion among its readers.

This new version is certain to provoke controversy and devotion in equal measures. A ‘first draft’ of the epic version known to all, it was completed in 1866 but never published. A closely guarded secret for a century and a half, the unveiling of the original version of ‘War and Peace’, with an ending different to that we all know, is of huge significance to students of Tolstoy. But it is also sure to prove fascinating to the general reader who will find it an invigorating and absorbing read. Free of the solemn philosophical wanderings, the drama and tragedy of this sweeping tale is reinforced. His characters remain central throughout, emphasising their own personal journeys, their loves and passions, their successes and failures and their own personal tragedies.

500 pages shorter, this is historical fiction at its most vivid and vital, and readers will marvel anew at Tolstoy’s unique ability to conjure the lives and souls of Russia and the Russians in all their glory. For devotees who long for more, for those who struggled and didn’t quite make it to the end, or for those who have always wanted to know what all the fuss is about, this is essential reading.

1. War and Peace : The Original Version

Descripción Paperback. Condición: Good. The book has been read but remains in clean condition. All pages are intact and the cover is intact. Some minor wear to the spine. Nş de ref. del artículo: GOR002000287

Descripción Paperback. Condición: Very Good. The book has been read, but is in excellent condition. Pages are intact and not marred by notes or highlighting. The spine remains undamaged. Nş de ref. del artículo: GOR002312422

4. War and Peace. The Original Version

Descripción Paperback. Condición: Very Good. War and Peace: Original Version This book is in very good condition and will be shipped within 24 hours of ordering. The cover may have some limited signs of wear but the pages are clean, intact and the spine remains undamaged. This book has clearly been well maintained and looked after thus far. Money back guarantee if you are not satisfied. See all our books here, order more than 1 book and get discounted shipping. Nş de ref. del artículo: 7719-9780007148387

Descripción Paperback. Condición: Very Good. Shipped within 24 hours from our UK warehouse. Clean, undamaged book with no damage to pages and minimal wear to the cover. Spine still tight, in very good condition. Remember if you are not happy, you are covered by our 100% money back guarantee. Nş de ref. del artículo: 6545-9780007148387