Artículos relacionados a Crusade: The Untold Story of the Gulf War

Atkinson, Rick Crusade: The Untold Story of the Gulf War

Crusade: The Untold Story of the Gulf War 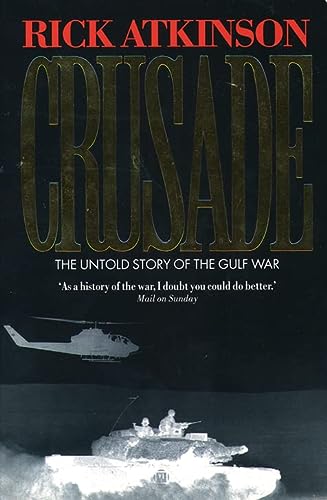 During the Gulf War, the Allied governments and the Pentagon combined to impose unprecedented restrictions on the media's access to the battlefield. This book uses interviews with over 500 senior policy-makers, military officers and soldiers, in an attempt to provide a more balanced account of the war. The book follows the 42 days of war, from the first night to the final day, providing vivid accounts of bombing runs and White House strategy sessions, firefights and bitter inter-service conflicts. The book brings to life a rich cast of characters, from Norman Schwarzkopf and Colin Powell to pilot David Eberly whose plane was shot down over Iraq.

"If you are going to read only one book about the Gulf War, 'Crusade', because of its rich human detail and skilful writing, should be it."
SAN DIEGO UNION-TRIBUNE

"Tremendous accumulation of detail and colour. Atkinson adduces witnesses from every level: foot soldiers, pilots, generals, policy-makers... We are treated to almost every significant conversation that took place between American participants during the conflict that isn't classified, and probably a few that are.
Atkinson provides an antidote to the propagandists, poseurs and idle speculators who have, together with the writers of self-serving memoirs, dominated subsequent discussion of this war as they have so many wars before... forces us to reassess both events and reputations."
LITERARY REVIEW

"Transfixes us with a crackling-fast, richly reported, absorbing, you-are-there techno-thriller of a military history of the war. You will not be tempted to put it down... An astute and sympathetic, though out glorifying, account, paced so as to hurl the reader from one scene to the next. Sometimes war happens. And in the hands of a fine writer the battle itself makes a horrible and compelling story."
LOS ANGELES TIMES

"An excellent account. Contains much interesting material that was suppressed at the time. Atkinson tells the central story as well as it can be told today."
THE ECONOMIST

"Succeeds masterfully. An important book that debunks the myth of Schwarzkopf.
Atkinson pierces the Pentagon's veil of secrecy and gives us a first-rate book about how the war was fought."
CHICAGO TRIBUNE

1. Crusade: The Untold Story of the Gulf War

Descripción HarperCollins, 1994. Paperback. Condición: Good. All orders are dispatched the following working day from our UK warehouse. Established in 2004, we have over 500,000 books in stock. No quibble refund if not completely satisfied. Nş de ref. del artículo: mon0005052449

Descripción HarperCollins Publishers Ltd, 1994. Paperback. Condición: Used; Good. **SHIPPED FROM UK** We believe you will be completely satisfied with our quick and reliable service. All orders are dispatched as swiftly as possible! Buy with confidence! Aloysius Ihezie. Nş de ref. del artículo: mon0000546818

3. Crusade: The Untold Story of the Gulf War

Descripción Paperback. Condición: Very Good. The book has been read, but is in excellent condition. Pages are intact and not marred by notes or highlighting. The spine remains undamaged. Nş de ref. del artículo: GOR003969141

4. Crusade: The Untold Story of the Gulf War

Descripción Paperback. Condición: Good. The book has been read but remains in clean condition. All pages are intact and the cover is intact. Some minor wear to the spine. Nş de ref. del artículo: GOR002029423