Artículos relacionados a The Bride Price 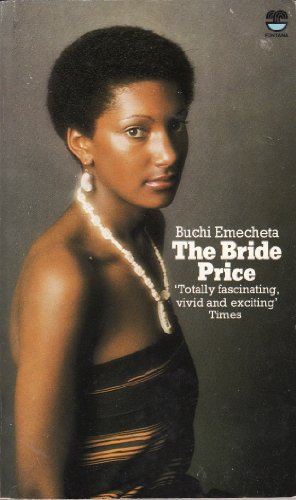 An artless story about a young Nigerian girl who has to leave Lagos and go back to her mother's family village after her father dies. There she and her young schoolteacher fall in love, but she is kidnapped into marrying someone else, and a scandal arises from the lies she tells her kidnapper about her loss of virginity in order to escape him. Nevertheless her lover rescues her and they live happily until she dies in childbirth, confirming the tradition that a dowryless bride will not survive. Emecheta as in Second-Class Citizen (1975), explicitly fills in her lessons about the clash between modernization and tribal residues in the 1950's. Particular twists crop up when it is a WWII wound that kills the girl's father, and an Esso-built hut that the young couple is so delighted to move into. But the book remains a fairy tale, written with a certain genuine sweetness, offering nothing that would disturb - or especially challenge - an adolescent reader. (Kirkus Reviews)

Descripción Paperback. Condición: Very Good. The book has been read, but is in excellent condition. Pages are intact and not marred by notes or highlighting. The spine remains undamaged. Nş de ref. del artículo: GOR003630117

Descripción Paperback. Condición: Good. All orders are dispatched the following working day from our UK warehouse. Established in 2004, we have over 500,000 books in stock. No quibble refund if not completely satisfied. Nş de ref. del artículo: mon0005734549

Descripción Condición: Fair. This is an ex-library book and may have the usual library/used-book markings inside.This book has soft covers. In fair condition, suitable as a study copy. Please note the Image in this listing is a stock photo and may not match the covers of the actual item,200grams, ISBN:0006145183. Nş de ref. del artículo: 8529345