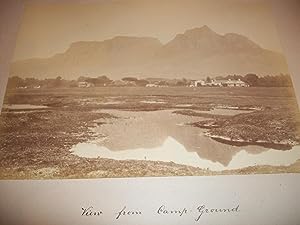 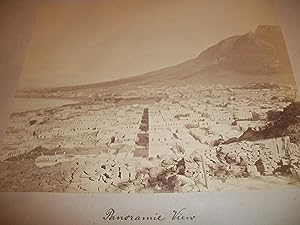 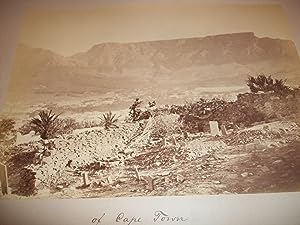 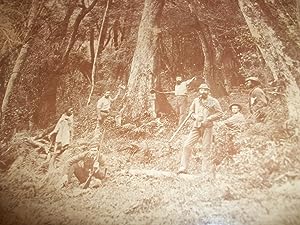 First Edition. 34 large unique albumen photographs from dry plates, some with neat titles in hand. All appear to have been taken in the early 1880s. All contained in the original large 32 by 25 cm album. Includes a large unique and original high detail photograph of the Clifton beaches without any sign of habitation, entitled "View from Kloof Road". One of the very few early photographs of Clifton ever taken. The hand written titles include: Cape Town from Table Mountain, Krantzes of Table Mountain, Gorge with Devil's Peak, Kasteel's Poort, View from Top of Table Mountain, View from Top of Table Mountain (Lion's Head), Cape Point Lighthouse and Cape of Good Hope, Sea Point Breakers, View from Camp-Ground, Table Mountain from Kloof Road, View from Kloof Road, Avenue at Rondebosch, Panoramic View of Cape Town (over two photographs), Fern Villa, Grotto Fern Villa (multiple examples) , Post Office Kokstad, Fundusi son of Tojo, Umzimkulu River and the Giant's Castle, Drakensberg. The album shows wear. All edges gilt. There are numerous other untitled scenes, including woodcutters in the Knysna forest and indigenous people in traditional dress. The most evocative photograph collection I have ever handled.Silver Bromide dry plates were only manufactured industrially on a large scale from about 1878. The London firm Wratten and Wainright started to export silver bromide plates of greater sensitivity in this year. Eastman was doing the same thing from the United States from 1880. The practical effect of this new technology was that it increased the sensitivy of photographic processes, bringing exposure times down to 1 to 1/200 of a second, as opposed to the 15 seconds required by its predecessor, collodion silver bromide emulsion ( from the History of Photography by Josef Maria Eder ). This made landscape and portrait photography much easier. William Charles Romaine Groom (1825-1900) was born in Birmingham and received 3 years instruction as a chemist from a Dr. Morgan of Leamington Spa. He was referred to as possessing "unusual capabilities". He arrived at Cape Town in 1844 and worked there and at Knysna as a succesful chemist. As such he was in close contact with all the Capetonian pioneers of photography a s a keen photographer, and also frequently contributed to exhibitions as a photographer. He was also an artist and friendly with other artists of the period, such as Thomas Baines, who painted in additional details in some of his photographs. He was also very involved with amateur dramatics, botany, horticulture, natural history, and music. Hence the many photographs in this album featuring his plant collection and the Knysna forest. While in Knysna he experimented with a wide variety of plants and wrote several articles on horticulture (from Secure the Shadow by Marjorie Bull and Joseph Denfield ). Africana. Hardback. No dj. N° de ref. del artículo 59765

Over 10000 books in large bright premises in picturesque rural village near Cape Town - Gateway to Africa - much loved by foreign tourists, we now offer books on the internet. We also offer the work of well known South African Artists and others. Digital images of artworks and books for sale available on request.


Orders subject to prior sale. P&P at cost (approx US$15 to 20 to most
international destinations). We accept Visa and MasterCard and Sterling cheques.
Payment can also be made via ABEbooks.com or ABEbooks.co.uk


Orders usually ship within 2 business days. Shipping costs are based on books weighing 2.2 LB, or 1 KG. If your book order is heavy or oversized, we may contact you to let you know extra shipping is required. Email us for details.