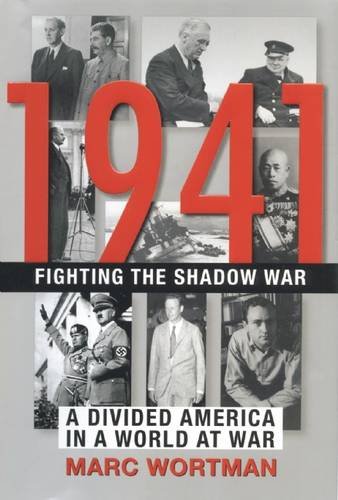 xiv + 409 pp., map, b/w photos, endnotes, index. A Divided America in a World at War. The story of America's clandestine involvement in World War II prior to the attack at Pearl Harbor and the declarations of war. Hard cover book & d/w both in fine cond. Flat signed & dated by the author under his printed name on the t.p. N° de ref. de la librería 011295

"Engrossing . . . an absorbing world-wide epic set in [a] pivotal year. . . Wortman's brisk narrative takes us across nations and oceans with a propulsive vigor that speeds the book along like a good thriller." --Wall Street Journal "Admirable work . . . superbly depicted." --Winnipeg Free Press "A wide-ranging examination of America's entry into World War II . . . [Wortman] displays a nice sense of the dramatic scene and a solid ear for telling quotes, and ample documentation gives readers the opportunity to look further into the history. Even readers familiar with the broad history of the era are likely to find new insights and new details of the behind-the-scenes maneuvering that preceded Pearl Harbor. An engaging and well-researched look behind the scenes of an important historic era. Highly recommended." --Kirkus Reviews (starred review) "In this probing chronicle of that tense year, Wortman illuminates the largely forgotten politics of a time when a fractured America debated the wisdom of joining the Allied cause in WWII. . . . A fascinating narrative of a domestic conflict presaging America's plunge into global war." --Booklist (starred review) "Like the rumble of thunder before a storm, Marc Wortman's 1941: Fighting the Shadow War creates a mesmerizing sense of ominous and terrifying foreboding. This is the fascinating story of the global war that most Americans know almost nothing about: the bitter and even deadly struggle pitting American against American as the United States confronted Hitler and Japan before our country's actual entrance into World War II. There were heroes and villains and, as Wortman depicts so richly up to Pearl Harbor, nobody knew who would win." --Nathaniel Philbrick, winner of the National Book Award for In the Heart of the Sea "Marc Wortman's 1941: Fighting the Shadow War tells the story of America's plunge into World War II in a way that is smart, suspenseful, and full of surprising historical twists. 1941 has the sweep and intimacy of an epic novel and the pace of a military thriller." --Debby Applegate, winner of the Pulitzer Prize for The Most Famous Man in America: The Biography of Henry Ward Beecher "With the skills of a mosaicist, Marc Wortman creates a fresh portrait of the most crucial year of the war, when the United States became the 'arsenal of democracy, ' when Hitler invaded the Soviet Union, and when the nation had its rendezvous with destiny at Pearl Harbor. Wortman brings into a single view both the war abroad and the 'shadow war' at home between supporters and opponents of American intervention, a battle that continued until the end of that tumultuous year." --Susan Dunn, author of 1940: FDR, Willkie, Lindbergh, Hitler--the Election Amid the Storm "The story of Mr Roosevelt's Hidden War on Nazi Germany and support of the British effort in 1940-1941 has been told before, of course, but not I think with such verve and delightful panache as in Marc Wortman's new book. Its strength lies in his blend of characters high and low, from FDR and his highest confidantes to a normal family at Pearl Harbor to the U.S. journalists in Berlin as they saw war advancing across Europe and, then, towards America itself. It's a smart book, and a great read." --Paul Kennedy, J. Richardson Dilworth Professor of History at Yale University, and author of The Engineers of Victory: The Problem Solvers Who Turned the Tide in the Second World War "Narrated with panache and a fastidious eye for detail, Wortman's 1941: Fighting the Shadow War tells how FDR ingeniously helped Churchill by any means he could without breaking the Neutrality Act. Beset by furious, powerful domestic rivalries, who had the country in their grip, they were bested only when Pearl Harbor was attacked. An on-the-edge-of-your-chair thriller." --Geoffrey Wolff, author of The Hard Way Around: The Passages of Joshua Slocum, and most recently A Day at the Beach