ArtÝculos relacionados a 101 People You Won't Meet in Heaven: The Twisted... 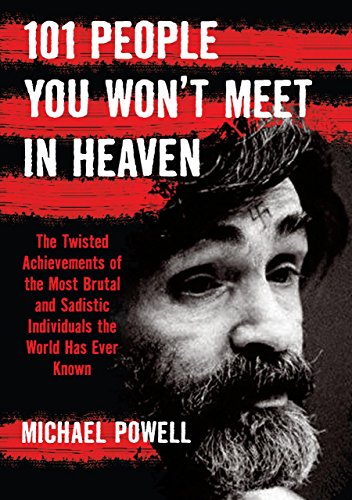 101 People You Won't Meet in Heaven: The Twisted Achievements of the Most Brutal and Sadistic Individuals the World has Ever Known

101 People You Won't Meet in Heaven examines the twisted achievements of the most brutal and sadistic individuals the world has ever seen. Evildoers jostle for position, including the likes of Basil the Bulgar-slayer, Vlad the Impaler, Lizzie Borden, Heinrich Himmler, Pol Pot, Ted Bundy, Jeffrey Dahmer, Nicolae Ceausescu, and Slobodan Milosevic. Many common threads appear, including brutalized childhoods, an unswerving will to power, and often the support, tacit or otherwise, of a legion of willing accomplices. There are many contrasts, too. Some are charismatic leaders with forceful personalities, while others acted alone and in secret, solitary narcissists, full of self-loathing and repressed desire. For those who are fascinated by what makes men evil, violent, and monstrous, "101 People You Won't Meet in Heaven" is an engrossing and honest examination of humankind's baser instincts.